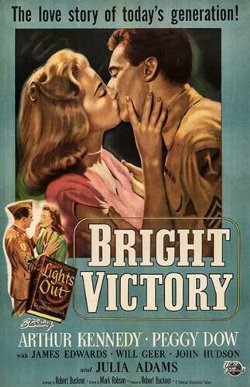 Kino Lorber has released a Blu-ray of Mark Robson’s Bright Victory. Previously unavailable on home video in the U.S., this 1951 film was one of the most acclaimed films of its day and one which still stands out.

Arthur Kennedy received the New York Film Critics Award for Best Actor over Marlon Brando in A Streetcar Named Desire, Montgomery Clift in A Place in the Sun, and Fredric March in Death of a Salesman. All four actors were Oscar-nominated, losing to Humphrey Bogart whose The African Queen did not open in New York until 1952 and was thus ineligible.

Following in the footsteps of John Garfield in 1945’s Pride of the Marines, Harold Russell in 1946’s The Best Years of Our Lives, and Marlon Brando in 1950’s The Men, Kennedy plays a wounded World War II soldier adjusting to his life as a handicapped veteran. Like Garfield in Pride of the Yankees, he was blinded in action. Unlike Garfield, Russell, and Brando, he does not have the unwavering support of a strong woman like Eleanor Parker, Cathy O’Donnell, and Teresa Wright were for them. His girl Julie Adams loves him, but when faced with choosing between an uncertain future with him and the continued comfort of her wealthy father, she chooses to stay with her father.

What Kennedy does have is the camaraderie of his fellow convalescents and the friendship of a hospital volunteer that he doesn’t dare fall in love with. He bungles both relationships but finally realizes that he is in love with the volunteer, beautifully played by Peggy Dow (Harvey), who retired from acting in 1952 and is still living happily ever after at 94.

The film’s most shocking scene is the one in which the bigoted Kennedy discovers that his best friend at the hospital is black and rejects him.

That the love story would turn out the way you expected it to, was never in doubt, but the broken relationship between Kennedy and James Edwards (Home of the Brave) remains uncertain until the film’s celebrated last scene.

Robson, who had previously directed both Kennedy (in Champion) and Edwards (in Home of the Brave) would later receive Oscar nominations of his own for directing Peyton Place and The Inn of the Sixth Happiness.

The film is more reminiscent of John Ford’s 1939 Young Mr. Lincoln in which Henry Fonda played the title role than it is of any other portrayal of the Civil War era president.

Massey had of course created the role on Broadway where he became so entrenched in the character that he even absentmindedly signed autographs as Abraham Lincoln. Ruth Gordon, who had three uncredited roles in 1915 silent films, made her talkie debut as Mary Todd Lincoln and Gene Lockhart played orator Stephen Douglas. Neither had been in the play nor are they in the 1940 Lux Radio Theater broadcast included as an extra on the Blu-ray. Fay Bainter and Otto Kruger had those roles.

Massey was so identified with the role that he reprised the character many times, last doing so in a 1971 short when he was 75.

Cromwell, whose direction of Massey and company is first rate, oddly never received an Oscar in a long career that encompassed 1934’s Of Human Bondage, 1944’s Since You Went Away, 1946’s Anna and the King of Siam, and 1950’s Caged. He was the father of character actor James Cromwell (Babe).

Imprint has released a two-disc box set of Richard Quine’s 1960 smash hit The World of Suzie Wong and two documentaries, 2010’s To Whom It May Concern, exploring the life of star Nancy Kwan, and 2008’s Hollywood Chinese in which Kwan and other stars discuss the history of Chinese in films from the silent days through the early 21st century.

The World of Suzie Wong began life as a 1957 novel about a struggling young British artist in Hong Kong who falls in love with a beautiful prostitute. It became a Broadway play in 1958 in which the artist was a young American artist played by William Shatner. The prostitute was played by France Nuyen straight from her film debut in South Pacific.

Nuyen was set to reprise her role in the film opposite the not-so-young William Holden, now portrayed as a successful businessman taking a break from his regular job. Nuyen, reportedly suffering from a nervous breakdown, was removed from the film, and replaced by Nancy Kwan in her film debut. She would play opposite Holden in 1962’s Satan Never Sleeps.

Despite the film’s mixed reviews, it was a box office sensation hailed as the first Hollywood film in which a leading Asian character was played by an actual Asian, or in this case a Eurasian. Although raised in Hong Kong by her Chinese father, Kwan’s mother was British.

This is not a film about the evils of prostitution. Kwan’s character is as sanitized as Julia Roberts’ Pretty Woman would be thirty years later, but at least they were calling a spade a spade unlike in From Here to Eternity just seven years earlier when Donna Reed’s character had to be identified as a dancehall girl.

Kwan had the lead in the following year’s Flower Drum Song, which was an even bigger hit, but although she remains active to this day, she never again had a role as starry as her first two.

The Kwan biography is especially fascinating as it follows her relationship with Bernie Pock, her son with her first husband, an Austrian hotelier. She raised him by herself in Europe and Hong Kong before bringing him to Hollywood where he became a stuntman at 16. A major stuntman in his twenties working on such films as Back to the Future, Die Hard, and The Last of the Mohicans, he married a woman from whom he tragically contracted AIDS and died at 33 in 1996, working almost to the end as an actor and director.

Hollywood Chinese is also fascinating, mixing archival footage with interviews from Kwan and other Asian actors as well as several Caucasian actors who portrayed Asians including Luise Rainer, then in her late 90s.

This week’s new releases include the Blu-ray releases of Dreamland and The Strange Love of Martha Ivers.