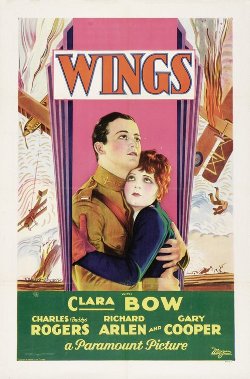 Paramount Pictures was founded on May 8, 1912, making it the second oldest U.S. film studio still in existence. Universal, which was founded eight days earlier on April 30, 1912, is the oldest.

Paramount won the first Oscar for Best Picture, 1927’s Wings, two years ahead of Universal’s first Oscar for 1930’s All Quiet on the Western Front. Its roster of stars from the late 1920s through the late 1940s included Gary Cooper (A Farewell to Arms), Marlene Dietrich (Shanghai Express), Fredric March (Dr. Jekyll and Mr. Hyde), Mae West (She Done Him Wrong, The Marx Brothers (Duck Soup), Claudette Colbert (Cleopatra), Bob Hope (The Ghost Breakers), Bing Crosby (Holiday Inn), and Fred MacMurray (Double Indemnity). Its directors included Cecil B. DeMille (The Sign of the Cross), Josef von Sternberg (Morocco), Leo McCarey (Going My Way), and Billy Wilder (The Lost Weekend). Universal, during this time, had its greatest successes with horror films beginning with 1931’s Frankenstein and Dracula, and later, Deanna Durbin musicals such as It Started with Eve.

Both studios grew bigger and more powerful through mergers and acquisitions that included TV shows. In 1958, Paramount, not seeing the value in its old movies, sold its pre-December 1948 library to Universal, through which many of those films have been released on home video.

In the early days of home video, Paramount did a decent job of releasing the films it still owned on VHS and later DVD, but has been slower than any other studio in upgrading its films to Blu-ray. Some highly popular Paramount films such as Shane, The Ten Commandments, The Godfather, and Ghost were given Blu-ray releases, some of them over and over, but others were still without release.

Other distributers, such as Criterion, Twilight Time, Kino Lorber, and Shout! Factory, have also been licensed to release Blu-rays of Paramount’s films on occasion. Shout! Factory has just released a Blu-ray of Dino de Laurentiis’ 1976 version of King Kong, starring Jeff Brides and Charles Grodin.

More recently, Paramount has allowed Australian Via Vison’s Imprint label to release some of its titles on region-free Blu-rays while releasing some under its own label. Via Vison Imprint releases include such films as Sorry, Wrong Number, A Place in the Sun, I Married a Monster from Outer Space, and, coming in August, The Straight Story.

Paramount has recently released The Greatest Show on Earth, Roman Holiday, The Court Jester, and Mommie Dearest on its premium Paramount Presents label along with reissues of several previously released Blu-rays. These releases include numerous extras. Paramount has also stepped up its release of films previously unavailable on Blu-ray without giving them special editions. Recent such releases include Barefoot in the Park and In & Out. The most sought-after Paramount title not yet released on Blu-ray in the U.S. is the 1980 Oscar winner Ordinary People.

Paramount subsidiary Paramount Television holds the copyright on shows that it produced for CBS as well as several shows that were broadcast on the network prior to its merger. These run the gamut from the original Perry Mason series to the various versions of Star Trek, many of which have long been available on DVD, some of them on Blu-ray as well.

The Yellowstone of the title is a ranch across the U.S. Highway from the portion of Yellowstone National Park that runs through Montana. 95% of the park is in Wyoming, 1% is in Idaho with 4% is in Montana, but that is enough for a portion of the fictitious largest contiguous ranch in the U.S. to be adjacent to.

The series centers around Kevin Costner as the 60-something sixth-generation patriarch of the ranch. He is also the State of Montana’s Livestock Commissioner. In the series opener he has two sons and a daughter in their mid-thirties and another son in his late twenties. They are played, respectively, by Dave Annable, Wes Bentley, Kelly Reilly, and Luke Grimes. Annable is head of security at the ranch and a livestock agent. Bentley is the ranch’s lawyer and aspiring politician. Reilly is the ranch’s financier. Grimes (second-billed to Costner) is a former US Navy SEAL, arried to a Native American schoolteacher and living on the adjacent Indian Reservation with his wife and their young son.

The series plays out like Dallas-meets-The Godfather with twists and turns you don’t see coming. Annable is killed off in the first episode with repercussions that are not easily resolved.

The first and second seasons revolve around an ambitious entrepreneur from California (Danny Huston) and a newly elected Native American tribal chief or Chairman (Gil Birmingham) who conspire to build a hotel and casino next to the ranch. The third season adds a group that wants to build an airport in the middle of the ranch either through sale or state-forced eminent domain.

In-between the drama, we get a vivid sense of ranch life through the various cowboys who train the horses, round up the cattle, and perform various other functions of ranch life. Other principal players include Cole Houser as the ranch foreman, Kelsey Asbille as Grimes’ Native American wife, Brecken Merrill as their son, Jefferson White as a ranch hand and amateur bronc rider, Ian Bohen as a ranch hand who doubles as a livestock officer, Ryan Bingham as a rancher and aspiring singer, and Wendy Moniz as the Governor of Montana, who is Costner’s love interest.

Despite the show’s popularity, it has yet to receive significant awards recognition. Its loftiest mention to date has been an American Society of Cinematographers (ASC) nomination for Outstanding Cinematography for its pilot episode.

This week’s U.S. Blu-ray releases include There Was a Crooked Man and Cartouche.