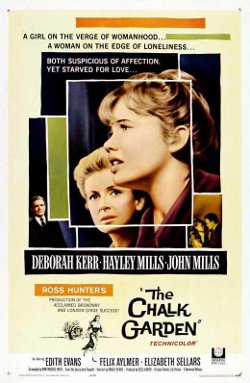 The Chalk Garden, newly released on Blu-ray by Kino Lorber, is the 1964 film version of a celebrated 1950s British play with one of the most unusual production histories of any such play.

The play about the clash between the imperious dowager Mrs. St. Maugham and Miss Madrigal, the mysterious governess she hires to attend her mentally disturbed granddaughter Laurel, was written by Enid Bagnold, then best known as the author of National Velvet, which had been made into a popular film by MGM in 1944. When the West End producer Binkie Beaumont turned down the play, Irene Selznick, daughter of MGM’s Louis B. Mayer and former wife of David O. Selznick (Gone with the Wind), stepped in and cut a deal with Bagnold to produce the play on Broadway.

Bagnold wanted Edith Evans (The Whisperers) for Mrs. St. Maugham, but Selznick insisted on Gladys Cooper (Now, Voyager). She also wanted her friend Katharine Hepburn to play Miss Madrigal, but Hepburn wasn’t interested and the two settled on Wendy Hiller (Separate Tables). Hiller, however, did not want to go to America at the time. The play was then produced on Broadway with Cooper and Siobhan McKenna (King of Kings) in the leads. Both actresses as well as the play, its director (Albert Marre, who replaced George Cukor), and featured actor Fritz Weaver, who played the butler, were nominated for Tonys the same year as Cat on a Hot Tin Roof and The Diary of Anne Frank with the latter winning.

The play was produced in London by a chagrined Beaumont the following year with Evans and Peggy Ashcroft (A Passage to India) in the leads, with Cooper filling in for Evans after the latter was taken ill on the night Cooper gave her last performance on Broadway.

Universal purchased the film rights and assigned the production to Ross Hunter after the enormous success of 1959’s Imitation of Life and Pillow Talk. Hunter wanted to move the locale to Carmel, shifting the focus from Mrs. St. Maugham and Miss Madrigal to Madrigal and Laurel with Joanne Woodward and Sandra Dee in those roles and Cooper repeating her stage role as Mrs. St. Maugham. Unfortunately, Woodward became pregnant and dropped out. Dee was now getting too old to be convincing as a 15-year-old. Interest shifted to Ingrid Bergman and Hayley Mills but there were issues with the casting of Mills, under contract with Disney, which had exclusive U.S. rights to their Pollyanna and The Parent Trap star. Filming finally took place in 1963 in England with Deborah Kerr as Madrigal, Hayley Mills as Laurel, her father John Mills as the butler, and Edith Evans as Mrs. St. Maugham.

Although the film received excellent notices and acclaim for all four stars as well as Elizabeth Sellars as Laurel’s mother and Felix Aylmer as the judge called in by Mrs. St. Maugham to decide Laurel’s permanent custody, the only performer nominated for an Oscar was Evans who prevailed over Cooper for the plum role of the dowager. Ironically, Cooper was also nominated that year for My Fair Lady directed by George Cukor, who had directed Cooper in the out-of-town tryouts for the original Broadway production of The Chalk Garden. They both lost to Lila Kedrova in Zorba the Greek.

Kino’s beautifully rendered Blu-ray features an excellent commentary by film historian Tim Lucas who gets most of the background information right.

Kino Lorber has also released an excellent Blu-ray of S.O.S. Titanic, which was a 1979 TV production in the U.S. and a theatrical release that same year in the U.K. Both versions, which are different, are included here.

The 102-minute theatrical cut is the one that receives the most attention as it is given a 4K restoration and commentary by film historian Evgueni Mlodik. She does an excellent job of pointing out the various filming locations which included the R.M.S. Queen Mary, then already a hotel permanently anchored in California’s Long Beach harbor.

The brand-new HD master of the 144-minute TV cut, though, is the more interesting version. Originally presented as a 3-hour miniseries over the course of two nights, it provides more character development than the theatrical version with its emphasis on the sinking of the ship. The TV cut begins with the S.O.S. received by the R.M.S. Carpathia, which was four hours away from the sinking ship but was able to rescue all the passengers from the lifeboats. It ends with a devastating morning after scene in which one of the chirpy hostesses from the Carpathia tries to get the newly widowed women to eat something by saying “it was God’s will. You must move on. Coffee?” The response, attributed to Mrs. Astor, is “No coffee. No God, either. God went down with the Titanic.”

TV veteran David Janssen gets top billing as John Jacob Astor IV, with relatively unknown Beverly Ross billed eighth as his pregnant 19-year-old second wife. Cloris Leachman receives second billing as “the unsinkable” Molly Brown, followed by Susan Saint James as a fictional schoolteacher and love interest for fourth billed David Warner as Laurence Beesley, the real-life science teacher whose account of the sinking of the ship was published just two months after the event. Ian Holm as the surviving owner of the ship, Helen Mirren as a real-life stewardess who survived the sinking, and Harry Andrews as the captain who goes down with the ship were also given star billing.

Warner and Holm are especially good in their roles as are Geoffrey Whitehead as the ship’s architect, and Gerald McSorley and Robert Pugh as third-class Irish passengers. All three sadly perish.

Shots of the sinking ship were taken from the 1958 black-and-white British film A Night to Remember and colorized. S.O.S. Titanic, which was the first color version of the sinking of the ship, was made five years before the discovery of the remains of the sunken ship which confirmed long held rumors that the ship split in two. That theory had been debunked by Beasley and other survivors who were at a disadvantage in the pitch-black dead of night of the actual event.

On a technical level, S.O.S. Titanic is less thrilling than James Cameron better known 1997 version of Titanic with Kate Winslet and Leonard DiCaprio, but is more realistic than all versions made to date, including Jean Negulesco’s 1953 version with Barbara Stanwyck and Clifton Webb.

Also new from Kino Lorber are the Blu-ray releases of three extremely violent thrillers starring George Peppard, 1968’s P.J. , 1972’s The Groundstar Conspiracy, and 1974’s Newman’s Law, none of which I recommend.

This week’s new releases include the Blu-ray releases of Sergeant York and Reversal of Fortune.