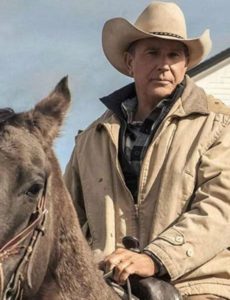 Born January 18, 1955 in Lynwood, California, Kevin Costner was the third child of Sharon and Bill Costner. His mother was a welfare worker, his father an electrician. He was raised in various parts of Southern California as his father’s career progressed within Southern California Edison. He was active in sports in high school and had various jobs before becoming an actor.

Costner married Cindy, his high school sweetheart in 1978 with whom he would have three children. He made his film debut in Malibu Hot Summer in which he was fifth billed the same year. The film, subsequently titled Sizzle Beach U.S.A. , was not released until 1981. His second film was 1982’s Night Shift in which he had a minor role. He had small parts in Frances and Table for Five. He played the corpse in 1983’s megahit, The Big Chill. His first role of significance was in 1985’s Silverado.

The actor’s career took off in a big way between 1987 and 1989 in four major hits, The Untouchables, No Way Out, Bull Durham, and Field of Dreams. In 1990, he partnered with producer Jim Wilson to form Tig Productions. The company’s first film was Dances with Wolves which Costner directed and starred in. The film was nominated for twelve Oscars and won seven including two for Costner as director and producer. He lost Best Actor to Jeremy Irons in Reversal of Fortune.

The newly minted Oscar winner had a series of successes following his win with Robin Hood: Prince of Thieves, JFK, The Bodyguard, A Perfect World, and Wyatt Earp. His marriage to Cindy ended in 1994, and he had his first poor showing at the box-office since becoming a major star with that year’s The War. The following year’s Waterworld earned him a Razzie nomination for Worst Actor of the Year.

Costner’s career rebounded somewhat with good notices for 1996’s Tin Cup, the same year he had a son with then girlfriend Bridget Rooney. In 1997, he directed his second film, The Postman, which was not a success. 1999’s Message in a Bottle received mixed reviews.

In 2004, Costner married model and handbag designer Christine Baumgartner, with whom he has three additional children. He is currently starring in the fourth season of the TV series, Yellowstone. The actor remains ever busy at 66.

This stylish remake of 1948’s The Big Clock launched Costner’s career as a leading man in a role turned down by Mel Gibson and Patrick Swayze who had their own heartthrob roles in the same year’s 1987’s Lethal Weapon and Dirty Dancing, respectively. Although a remake, the locale has been changed from a publishing company to the U.S. government. Costner is sensational as the government agent wanted for the murder of Sean Young, who was actually killed by his boss, the U.S. Secretary of Defense played by Gene Hackman, who is masterful in Charles Laughton’s old role.

The highest grossing western of all time, Costner’s sympathetic treatment of Native Americans so impressed the Sioux Nation that they adopted him as a member. Nominated for 12 Oscars and winner of 7, Costner won for what his first directorial effort and his first self-produced film. It won Oscars as well for its adapted screenplay, cinematography, film editing, sound, and score. The five it lost were for art direction, costume design, and its three nominated performances by Costner as the Civil War officer assigned to a remote outpost and supporting players Graham Greene and Mary McDonnell.

After the disaster that was Costner’s Razzie awarded 1995 film, Waterworld, he turned to his Bull Durham director for another romantic sports comedy for which he received a Golden Globe nomination. He plays a burned-out, washed-out golf pro in Western Texas who is on a quest to win the heart of the beautiful psychiatrist (Rene Russo) who is dating a highly successful player (Don Johnson) with whom he went to college. Excellent support from Cheech Marin, and briefly, Costner’s parents, Sharon and Bill as grandparents walking a dog with their grandson, appropriately played by Costner’s son, Joe.

One of the better uplifting sports films about high school coaches, the screenplay which takes place in 1987, invents a scenario that did not exist in the film’s real-life true story. Costner’s character was not fired from other schools, he had been at McFarland since he graduated college in 1964, and a coach since 1980. He also coached the girls’ cross-country team which is not shown in the film the year he won the school the first of its seven trophies. That aside, it’s an enjoyable film with fine performances by Costner, Maria Bello, Carlos Pratts, Johnny Ortiz, and Rodrigo Ramirez among others.

Costner and Diane Lane played the secondary roles of Clark Kent’s adoptive parents in 2013’s Man of Steel. They are together again in the leads in this suspense-filled modern western taken from Thomas Watson’s 1951 novel in which the couple lives in North Dakota and travels to Montana. The film is set in 1963 in which the couple lives in Montana and travels to North Dakota in search their grandson who was kidnapped by a family of outlaws who laid claim on the boy after his mother married into the family after the accidental death of Costner and Lane’s son. Lesley Manville plays the matriarch of the outlaw family.