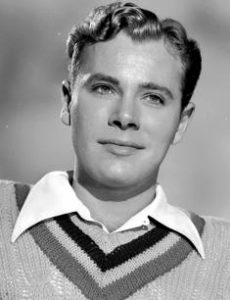 After his war service, Hunter returned to teaching in Cleveland where he his students sent his photograph to Paramount with the expectation that they would sign their handsome teacher to an acting contract. They passed, but Columbia signed him and gave him the lead male role opposite Judy Canova in 1944’s Louisiana Hayride, followed by seven more films through 1946. It was during this time that he met Jacques Mapes (1913-2002), the Hollywood set decorator who would become his life partner for more than forty years, one of the longest relationships in Hollywood history.

Moving to Universal, Hunter’s last role as an actor was in 1951’s The Groom Wore Spurs, the same year he became an associate producer on Flame of Araby. He moved up to full-time producer with 1953’s Take Me to Town, the first of many films he produced for director Douglas Sirk. It was followed by 1953’s All I Desire, 1954’s Taza, Son of Cohise and Magnificent Obsession, 1955’s There’s Always Tomorrow (in which he made his last on-screen appearance in a cameo) and All That Heaven Allows, and 1957’s Battle Hymn, all of which were directed by Sirk.

Hunter then produced two highly successful Debbie Reynolds comedies, 1957’s Tammy and the Bachelor, directed by Joseph Pevney, and 1958’s This Happy Feeling, directed by Blake Edwards before returning to a Douglas Sirk produced melodrama, the 1959 remake of Imitation of Life starring Lana Turner which would be Sirk’s last American film. It was back to comedy for the Doris Day-Rock Hudson smash hit, 1959’s Pillow Talk, his second blockbuster that year.

Throughout the 1960s, Hunter could do no wrong, producing hit after hit, including Portrait in Black with Turner and Anthony Quinn, Midnight Lace with Day and Rex Harrison, Tammy Tell Me True with Sandra Dee, Back Street with Susan Hayward, Flower Drum Song with Nancy Kwan and Miyoshi Umeki, The Thrill of It All with Day and James Garner, The Chalk Garden with Deborah Kerr and Hayley Mills, I’d Rather Be Rich with Sandra Dee and Maurice Chevalier, Madame X with Turner, Thoroughly Modern Millie with Julie Andrews and Mary Tyler Moore, and Rosie! with Rosalind Russell.

Hunter finally found himself in contention for an Oscar with 1970’s Airport which earned a total of 10 nominations including Best Picture. His final theatrical film, the critically lambasted musical remake of Lost Horizon was released in 1973.

Hunter’s last production was the 1979 TV movie, The Best Place to Be starring Donna Reed.

Hunter’s last Sirk-directed melodrama proved to be the most successful of all in the director’s career, his last Hollywood film before returning to his native Germany. A remake of Fannie Hurst’s tear-jerking novel first filmed successfully in 1934 with Claudette Colbert and Louise Beavers as white and black mothers respectively, raising daughters through thick and thin, this version starred Lana Turner and Juanita Moore in those roles with Sandra Dee and Susan Kohner as their daughters. Moore and Kohner were nominated for Oscars, the second and third for a Hunter-produced film following Jane Wyman in Magnificent Obsession

Hunter made his reputation producing glossy melodramas but proved to be just as successful with comedies such as Tammy and the Bachelor and This Happy Feeling, both starring Debbie Reynolds. He had his biggest hit yet with another comedy, this one, in which he transformed actress-singer Doris Day from the housewife and mother in The Man Who Knew Too Much to a 37-year-old virgin tease opposite Rock Hudson, whose meteoric rise he helped through Magnificent Obsession and All That Heaven Allows. It resulted in Day’s only Oscar nomination.

Hunter had been obsessed with making a film version of Enid Bagnold’s hit play for years, but true to fashion, made it more glamourous than it needed to be. Neame led a superb cast headed by Edith Evans and Deborah Kerr as the grandmother and nanny of brat Hayley Mills fighting for her soul under the watchful eye of butler John Mills, absent mother Elizabeth Sellars, and judge Felix Aylmer. Kerr and the Millses were given star billing, but fourth-billed Evans who played the grandmother on stage in London walked away with the film’s notices and its only Oscar nomination, the fifth actress to receive one from a Hunter-produced film.

Nominated for ten Academy Awards including Hunter’s only one for producing a Best Picture nominee, this old-fashioned disaster film featured an all-star cast led by Burt Lancaster, Dean Martin, Jean Seberg, Jacqueline Bisset, and Van Heflin as a mad bomber. Helen Hayes as a little old lady stowaway and Maureen Stapleton as Heflin’s distraught wife became the seventh and eighth actresses to be nominated for a Hunter-produced film following Carol Chaning in 1967’s Thoroughly Modern Millie. He would later produce the 1978 TV movie, A Family Upside Down starring Hayes and Fred Astaire.

No longer associated with Universal, Hunter independently produced this critically lambasted musical remake of James Hilton’s novel famously made sans music by Frank Capra in 1937. It was released by Columbia, the studio that had given Hunter his first Hollywood contract, albeit as an actor. The film had an all-star cast that included Peter Finch, Liv Ullmann, Sally Kellerman, George Kennedy, Michael York, Olivia Hussey, Bobby Van, James Shigeta, Charles Boyer, and John Gielgud, but only the latter two succeed in the old Sam Jaffe and H.B. Warner roles, arguably because they weren’t made to sing!