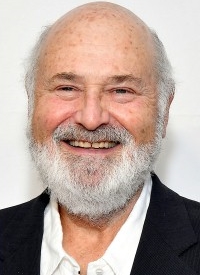 Born March 6, 1947, Robert Norman Reiner was born in the Bronx, New York to Estelle and Carl Reiner, the renown comedian, actor, writer, producer, director. It was only a matter of time before Rob will follow his father into show business.

The younger Reiner began his acting career in TV’s Manhunt in 1961. He continued appearing on TV throughout the 1960s. He was memorable on the big screen in 1970’s Where’s Poppa? and 1971’s Summertree.

In the fall of 1971, Reiner became one of the four stars of the groundbreaking TV series, All in the Family. He played Mike “Meathead” Stivic, the son-in-law of the bigoted Archie Bunker, played by Carroll O’Connor, and Archie’s wife, Edith, played by Jean Stapleton. Sally Struthers played their daughter and Rob’s wife, Gloria. The show won numerous awards through 1978, including acting Emmys for all four stars, of which Reiner won two.

Although he had long been active in writing and directing for TV, Reiner’s first such efforts for the big screen were for 1984’s This Is Spinal Tap in which he also played a role. The following year’s The Sure Thing won critical huzzahs but no awards recognition.

It was for 1986’s Stand by Me for which he received his first nomination from the Directors Guild of America. That film also earned him a Golden Globe nomination, but Oscar was still not in sight.

1987’s The Princess Bride would bring Reiner further awards recognition, although this time he was also bypassed the DGA and the Hollywood Foreign Press Association (presenters of the Golden Globe), as well as Oscar.

The popular 1989 comedy, When Harry Met Sally… enhanced Reiner’s recognition as a fine director, earning him his second DGA and Golden Globe nominations for direction.

1992’s A Few Good Men finally earned Reiner an Oscar nomination, albeit one for Best Picture. He was still ignored by Oscar’s directorial membership despite nominations from both DGA and the Golden Globes.

1995’s The American President earner Reiner his fourth Golden Globe and DGA nominations, but still no recognition from the Academy of Motion Picture Arts and Sciences for Oscar consideration as a director.

Reiner’s career as a director continued with such films as 1996’s Ghosts of Mississippi, 2005’s Rumor Has It, 2007’s The Bucket List, 2016’s LBJ, and 2017’s Shock and Awe. His acting career continues with recent roles in Hollywood and the TV miniseries, The Princess Bride at 74.

At the time of its release, author Stephen King considered Reiner’s film to be the best adaptation of any of his books. River Phoenix, Corey Feldman, Wil Wheaton, and Jerry O’Connell were the stars of the film in which a writer recounts a childhood memory about the discovery of a body. The film was nominated for an Oscar for Best Adapted Screenplay. Bothe the film and Reiner were nominated for Golden Globes and Reiner was nominated for Best Director by the DGA. The film, Reiner and the screenplay were also nominated for awards by the Film Independent Spirit Awards.

Quite possibly Reiner’s most popular film, which has spawned a current TV miniseries. It’s the story of a young boy, who while home sick in bed, is read a story by his grandfather in which a farm boy turned pirate encounters numerous obstacles, enemies and allies in his quest to be reunited with his true love. Cary Elwes, Many Patinkin, Chris Sarandon, Christopher Guest, Wallace Shawn, and André the Giant star along with Robin Wright as the princess, Fred Savage as the boy and Peter Falk as the grandfather. The film received an Oscar nomination for the song, “Storybook Love”.

The premise of this popular road comedy is that the title characters, Harry and Sally, have known each other for years, and are very good friends, but they fear sex would ruin the friendship. Billy Crystal and Meg Ryan have the title roles, with Carrie Fisher and Bruno Kirby in the second leads. Reiner’s mother, Estelle, has a cameo in the film’s famous restaurant scene where she reacts to Ryan’s fake orgasm with the line, “I’ll have what she’s having.” The film received an Oscar nomination for Nora Ephron’s Original Screenplay and numerous other award recognition including Golden Globe and DGA nominations for Reiner.

Nominated for four Academy Awards, this film represents Reiner’s sole Oscar nomination to date, one he earned for Best Picture, not Best Director, an accolade he has still not received from the Academy. Aaron Sorkin’s play, for which he also wrote the screenplay, was turned into a major screen success which also earned Oscar nominations for Best Supporting Actor (Jack Nicholson), Best Film Editing, and Best Sound. Nicholson’s line to star Tom Cruise, “you can’t handle the truth!” was voted #29 out of 100 of the best movie quotes by the American Film Institute.

Aaron Sorkin wrote an original screenplay for this one in which Michael Douglas is a widowed U.S. President running for reelection who falls in love with a lobbyist played by Annette Bening. Martin Sheen who be the president in Sorkin’s 1999 TV series, The West Wing is Douglas’ chief of staff here. Douglas’ opponent for the presidency is Richard Dreyfuss. The Oval Office in the film was first used for 1993’s Dave and later for The West Wing. Reiner was again nominated for a Golden Globe and an DGA award, but not for an Oscar.