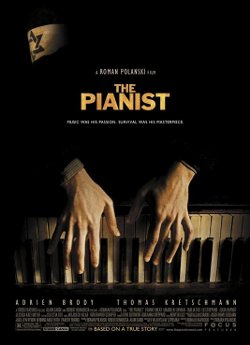 The Pianist has finally been given a U.S. release on Blu-ray. The closest the 2002 Oscar-winning film came to a U.S. Blu-ray release previously was on a Region “A” Canadian release a few years ago.

Based on the autobiography of Polish pianist Wladyslaw Szpilman, the Shout Select release is loaded with extras including an interview with Daniel Szpilman, the pianist’s grandson, who played the part of a boy in the marketplace in the Warsaw Jewish ghetto who is later seen on his way to the Treblinka extermination camp.

Despite the film’s title, Szpilman was more than a pianist. Born into a Jewish family, he was educated in Warsaw and Berlin. He became a composer whose works included scores for Polish films. As a pianist, he had his own radio program broadcast from Warsaw from 1935 until the Nazis invaded Poland in 1939. After that he was allowed to play in cafes for a while. His family, consisting of his mother, violinist father, brother, two sisters, and himself, was forced to move to the Warsaw ghetto in 1940. In 1942, they were put in line to board the train to the extermination camp. A friend in the Jewish Police was able to pull Szpilman, but none of his family members, from the line. He then spent time working in the ghetto where he helped smuggle in guns for the resistance. After the ghetto was shut down, he hid for two years during which he was helped by numerous people which eventually included a kind-hearted German soldier. That solider, whose name Szpilman didn’t know, was later captured by the Russians and falsely accused by them of war crimes. He died in prison in 1952 despite efforts from Szpilman and his supporters to have him freed as soon as they learned his name and became aware of his fate in 1951.

Szpilman returned to national, and eventually world prominence after the war. He died in 2000 at the age of 88 while the film was in pre-production.

Roman Polanski, who himself survived the German occupation of Krakow, Poland, was asked by Steven Spielberg’s to direct 1993’s Schindler’s List but declined because it hit too close to home. Spielberg then directed the Oscar-winning film himself. Polanski felt more comfortable telling Szpilman’s story because it took place in Warsaw rather than Krakow.

1,400 actors were tested for the part of Szpilman before Adrien Brody was selected. Brody, who lost weight from his already thin frame for the part, was expected to become a big star with the release of Terrence Malick’s The Thin Red Line in 1998, but the notoriously fussy Malick tinkered with the film up until its release, by which time Brody’s star role had been severely reduced to the point of embarrassment for the young actor who took his parents to the film’s world premiere unaware of Malick’s drastic cuts.

Except for the historical footage that opens the film and a brief cut to a Russian prison camp near the end of the film, Brody is in every scene with everything taking place from his point of view.

The meticulously detailed film won the Palme d’Or at the 2002 Cannes Film Festival and was the first film to win Best Picture at the French César Awards in which not a single word of French was spoken. It won Oscars for Polanski for Best Directing, Brody for Best Actor, and Ronald Harwood (The Dresser) for Best Adapted Screenplay. The film had also been honored with Oscar nominations for Pawel Edelman (Ray) for Best Cinematography, Hervé de Luze (Jean de Florette/Manon of the Sping) for Best Film Editing, and Anna B. Sheppard (Inglorious Basterds) for Best Costume Design.

Previously available as a region “B” release from the U.K., Alias Nick Beal has been given a Region “A” release by Kino Lorber.

John Farrow’s 1949 film is probably the best-known film based on the Faust legend made between 1941’s The Devil and Daniel Webster and 1958’s Damn Yankees.

Ray Milland (The Lost Weekend) plays the devil in this one with Thomas Mitchell (Stagecoach) as the politician who sells his soul for access to the governor’s mansion and Audrey Totter (Lady in the Lake) as the thinly disguised prostitute Milland uses to seduce Mitchell. The witty narration from noted film historian and film noir expert Eddie Muller is imported from the Region “B” Imprint release.

Also new from Kino Lorber is the Library of Congress-restored version of James Cruze’s 1929 film The Great Gabbo, previously only available in poorly put together public domain DVDs.

Despite its emphasis on ventriloquism, the film is basically a musical more in common with musicals of the day such as the Oscar-winning The Broadway Melody than with later films that concentrate on the madness of the ventriloquist such as 1945’s Dead of Night and 1978’s Magic.

This is a bare bones release form Kino. There are no extras.

New from Warner Archive is Raoul Walsh’s 1945 film Objective, Burma!, one of the best World War II films made during the war.

Errol Flynn stars as the battalion leader who successfully carries out a secret mission in the Burmese jungle but must lead his men out of the jungle on foot as Japanese forces prevent their landing. The exhilarating ending was extremely controversial in England, where it was felt that Hollywood glorified American troops at the expense of the British who were in Burma from the beginning of the war to the end. The film was consequently not allowed to be shown in the U.K. for seven years.

This week’s U.S. Blu-ray releases include Take Me Out to the Ball Game and An American in Paris: The Musical.