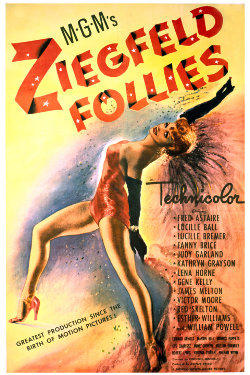 Absurdly promoted as the “greatest production since the birth of motion pictures,” Ziegfeld Follies was the first box-office hit of 1946. Its shameless promotion seems especially ridiculous in a year which would give us such truly great films as The Best Years of Our Lives, It’s a Wonderful Life, Notorious, The Razor’s Edge, and The Yearling from Hollywood, as well Brief Encounter and Henry V from the U.K., Open City from Italy, and Children of Paradise from France.

The idea of producing a film in the manner of the Ziegfeld Follies, containing musical numbers and skits but no plot, came to MGM studio heads in 1939 in the wake of the phenomenal success of the 1936 Oscar winner The Great Ziegfeld with William Powell in the title role. The idea was to have Powell playing Ziegfeld, who died in 1932, looking down from Heaven on a new production of his famed Follies. That idea was put on hold while they produced the dramatic 1941 film Ziegfeld Girl, in which Hedy Lamarr, Lana Turner, and Judy Garland vied for jobs in the Follies, instead. When that film proved to be a box-office success as well, ideas for Ziegfeld Follies sequences began in earnest in 1942 with Charles Walters (Easter Parade) assigned to direct.

Numerous scenes were planned, but not all were used when the film finally went into production in early 1944. Things were so hectic that Walters quit and was replaced by Vincente Minnelli on the heels of Meet Me in St. Louis. Minelli brought in his own team including vocal arranger Kay Thompson.

The film’s most famous sequence is “A Great Lady Has an Interview,” written and composed by Thompson. The sequence was planned for Greer Garson, who looked forward to spoofing her image and singing and dancing as she did in the music hall sequence in Random Harvest. Thompson came to Garson’s home to demonstrate how Garson should perform the sequence, flailing her arms about and exuberantly singing as Thompson would do on screen years later in Funny Face. Garson was aghast! The sequence was assigned to Judy Garland instead.

The finished product was a three-hour extravaganza that was previewed in Boston and Philadelphia in late 1945 to disastrous results. It was edited down to two hours for its official release in January 1946.

The Warner Archive Blu-ray upgrade features several documentaries on the making of the film including several of the sequences that were filmed but not used in the final cut. This one is primarily for musical film completists.

John Sturges’ 1959 film, Last Train from Gun Hill, has been given a much-needed Blu-ray restoration from Paramount.

One of the best adult westerns of its era, Sturges’ film was the director’s first for Paramount since the megahit Gunfight at the O.K. Corral, two years earlier. It was the third pairing of Kirk Douglas and Anthony Quinn, following 1954’s Ulysses and 1956’s Lust for Life for which Quinn won his second Best Supporting Actor Oscar while Douglas lost Best Actor to Yul Bynner in The King and I.

Tensions between the two actors reached a boiling point during the making of the film as both were planning to make a film about the Roman slave Spartacus. Douglas won that race. The real-life bitterness between the two makes their confrontation scenes all the more vivid.

Douglas plays an easy-going marshal whose wife is raped and murdered by two thugs (Earl Holliman, Brian Hutton), one of whom turns out to be the son of his former friend, now land baron Quinn. He takes the train from his town to Quinn’s town of Gun Hill in search of the killers, vowing to return with them on the last train from Gun Hill at 9 p.m. He catches the first guy with six hours to go until the train arrives. What happens between 3 and 9 p.m. provides the crux of the complex drama which also involves Carolyn Jones as Quinn’s former mistress.

Kino Lorber has released on Blu-ray Larry Peerce’s long unavailable One Potato, Two Potato, a 1964 Oscar nominee for Best Original Screenplay by Orville H. Hampton and Raphael Hayes. The slow-building film revolves around the custody trial of a young girl told in flashback, building to an all-too true devastating climax. Barbara Barrie won the Best Actress award of the Cannes Film Festival for her portrayal of a white woman married to a black man in the deep South. She was a runner-up to Kim Stanley in Séance on a Wet Afternoon at the New York Film Critics awards with Julie Andrews in Mary Poppins and Audrey Hepburn in My Fair Lady.

Bernie Hamilton co-starred as Barrie’s husband with Richard Mulligan in his film debut as her sleazy ex-husband. Also in the cast were Marti Mericka as Barrie’s daughter, Harry Belaver as the presiding judge, and Robert Earl Jones and Vinnette Carroll as Hamilton’s parents.

Extras include a new on-camera interview with director Peerce (The Incident).

Kino Lorber has also released a Blu-ray of Lionel Jeffries’ 1970 film of the British children’s classic The Railway Children. Filmed on location in the Yorkshire countryside, the film follows the adventures of two sisters and their brother as they await word on the disappearance of their father in turn-of-the-century England. Dinah Sheridan (Genevieve) is the mother and Jenny Agutter (An American Werewolf in London) is the oldest girl.