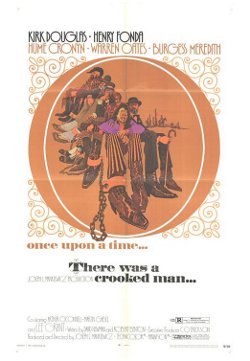 Joseph L. Mankiewicz’s penultimate film, There Was a Crooked Man…, had the misfortune of coming at the end of a cycle of astute, wryly observed modern gangster films and westerns. It was very much in the mode of Bonnie and Clyde, Cool Hand Luke, Butch Cassidy and the Sundance Kid, True Grit, The Wild Bunch, and Little Big Man. Alas, a stylistic western that starts out as a comedy and turns into a melodrama with a surprise ending was not what audiences were clamoring for at the end of 1970 when the hit of the moment was the romantic tearjerker Love Story.

Mankiewicz, whose celebrated career reached its zenith with his back-to-back Oscars for writing and directing A Letter to Three Wives and All About Eve two decades earlier, was in a career slump after 1963’s Cleopatra that wouldn’t recover until his last film, Sleuth, two years later.

There Was a Crooked Man… was Mankiewicz’s only western and one of the few films he directed for which he didn’t write the screenplay. That was the work of David Newman and Robert Benton who had three years earlier received an Oscar nomination for their screenplay for Bonnie and Clyde. Benton would go on to win three Oscars, two for writing (Kramer vs. Kramer, Places in the Heart) and one for directing (Kramer vs. Kramer). He was also nominated for his screenplays for The Late Show and Nobody’s Fool.

The combination of the legendary Mankiewicz and his newly popular writing team were enough to attract a star-studded cast that included Kirk Douglas, Henry Fonda, Warren Oates, Burgess Meredith, Hume Cronyn, John Randolph, and Michael Blodgett in an actioner set mostly in an 1880s maximum security prison in the Arizona desert.

Douglas played a charming, but duplicitous thief who hid half a million dollars in a snake-infested hole and offers to share it with anyone who will help him escape. Fonda played the prison’s reform-minded new warden. Oates was one of the prisoners who falls prey to Douglas’ duplicity. Meredith was the prison’s old coot. Cronyn and Randolph played a bickering elderly gay couple who ran a con game before getting caught. Blodgett, 31 at the time, played a naïve 17-year-old prisoner sentenced to death for killing a man who wanted to kill him. The actor was allegedly making his film debut when he had actually been in films for eight years at the time.

Despite all the talent involved, and the generally favorable reviews it received, the film was not a success. It has, however, remained popular on home video and just received a Blu-ray upgrade form Warner Archive.

Kino Lorber remains the most prolific producer of quality Blu-rays of both domestic and foreign product.

New Kino releases include the French films Ponette, Under the Sand, and Cartouche, and the British The Blue Lamp and The Green Man

Jacques Doillon’s 1996 film, Ponette has been given a gorgeous 4K restoration. The film is the heartrending tale of a four-year-old girl who cannot accept the death of her mother in a car crash. Victoire Thivisol, in one of the most memorable child performances ever captured on film, won the Best Actress award at the 1996 Venice Film Festival. The film won the New York Film Critics Award as Best Foreign Language Film of 1997, the year it was released in the U.S.

Charlotte Rampling won numerous awards, including the AARP Movies for Grownups Award for Best Actress, for her portrayal of the college professor losing her mind after the disappearance of her husband in Francois Ozon’s 2000 film Under the Sand, a 2001 release in the U.S. The film is much like Ponette in its exploration of grief and its protagonist’s refusal to believe that her loved one is really gone.

Philippe de Broca’s 1962 film Cartouche, a 1964 release in the U.S., has also been given a 4K restoration. One of the most colorful films of its era, this is an old-fashioned swashbuckler in the grand tradition of The Adventures of Robin Hood and The Mark of Zorro. Jean-Paul Belmondo stars as an 18th Century thief who joins forces with a beautiful bandit played by Claudia Cardinale. Together they launch a series of raids that rock the Parisian aristocracy.

Film critic and author Simon Abrams provides the audio commentary. An archival documentary with the late director is included as an extra.

Basil Dearden’s 1950 film The Blue Lamp was the U.K.’s highest grossing film of the year. The police procedural spawned a long-running British TV series with the film’s star, Jack Warner, reprising his character who dies in the film. Jimmy Hanley and Robert Flemyng play the other key policemen while Dirk Bogarde plays against type as a vicious killer on the run. Filmed on location in post-war London, tourists still seek the film’s locations, most of which no longer exist.

Alastair Sim had one of his best roles as a timid watchmaker who doubles as a professional assassin in Robert Day’s 1956 black comedy The Green Man, which is another film that has been given a 4K restoration. George Cole, who played Sim’s character of Ebenezer Scrooge as a young man in 1951’s A Christmas Carol, co-stars, along with Terry-Thomas and Jill Adams.