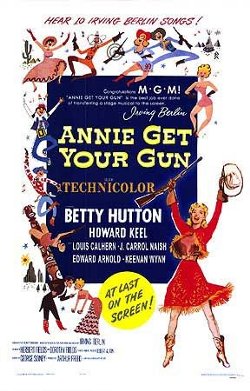 Warner Archive has released Blu-ray upgrades of Annie Get Your Gun and Broadway Melody of 1940, two musicals of completely different styles from different eras that were only ten years apart.

Before Show Boat, which opened on Broadway in late 1927, only operas and operettas had songs that flowed naturally from the show’s narrative. Shows featuring popular music were either revues or shows in which there may have been a story, but the singing was left to appearances on stage by the characters within the story. Although there were attempts to emulate the success of Show Boat, there wasn’t another successful contemporary musical in which characters burst spontaneously into song until Oklahoma! in 1943.

Oklahoma! opened the floodgates for the modern musical, not just on stage, but on screen as well. 1944’s Meet Me in St. Louis and 1945’s State Fair, with its score by Rogers & Hammerstein, the composers of Oklahoma! , led the way. At the same time, Rodgers and Hammerstein continued to write new musical productions for Broadway including Carousel in 1945 and South Pacific in 1949. Before any of those productions could be made into films, Irving Berlin’s glorious 1946 Annie Get Your Gun, produced by Rodgers and Hammerstein, was ready to go.

Filming began in 1949 with Judy Garland as sharpshooter Annie Oakley and Howard Keel as Frank Butler (her sharpshooting husband) in the leads, with Frank Morgan heading the supporting cast as Buffalo Bill, whose wild west show made legendary stars of Oakley and Butler. The casting of Garland and Morgan would have been a reunion for Dorothy and the wizard from The Wizard of Oz, but it wasn’t to be. Garland was fired from the production due to health reasons and Morgan died at the start of production.

Betty Hutton replaced Garland and Louis Calhern replaced Frank Morgan. Hutton and Keel allegedly did not get along during filming. Keel is said to have thought that Hutton was all about herself rather than the production and Hutton is said to have thought that Keel and the rest of the cast resented her for replacing the beloved Garland. Publicly, however, everyone connected with the film praised Hutton’s performance which is the best thing she ever did on the screen.

Hutton, at 29, and Keel, at 31, were close in age but the real-life Oakley and Butler were 16 and 29, respectively, when they met and married in 1876, both dying fifty years later, he of a broken heart less than three weeks after her death.

The Blu-ray, as did the 2000 DVD release, includes two scenes Garland filmed under the direction of Charles Walters (Easter Parade) on an MGM soundstage. Despite Garland’s great singing, the scenes are rather bloodless compared with the same scenes directed by George Sidney (The Harvey Girls) outdoors with cinematography by the great Charles Rosher (The Yearling.

Berlin’s score for Annie Get Your Gun boasts ten hit songs including the show business anthem There’s No Business Like Show Business, four years later the title of a film of its own starring Broadway’s original Annie, Ethel Merman.

A dispute between Berlin, and later his estate, and MGM, and later Ted Turner and Warner Bros., kept the film out of circulation from 1973 until 2000 when Berlin’s estate allowed it to be released on DVD after the success of the 1998 Broadway revival starring Bernadette Peters.

Broadway Melody of 1940 was the fourth film in the Broadway Melody series, the first being the 1929 film that won the 1928/29 Best Picture Oscar when musicals were still a novelty at the dawn of the sound era. Tap dancing queen Eleanor Powell was the female lead in both Broadway Melody of 1936 and Broadway Melody of 1938 opposite Robert Taylor, whose plots were from the tried-and-true putting-on-a-show tradition. Broadway Melody of 1940 offers more of the same with Fred Astaire and George Murphy as struggling dancing partners and Powell as a legendary Broadway star in need of a new partner. A mistaken identity plotline has Murphy getting the job of Powell’s partner instead of Astaire, allowing for several dances between him and Powell before Astaire and Powell come together on stage for the grand finale to the strains of Cole Porter’s “Begin the Beguine”. Frank Morgan co-stars as the show’s befuddled co-producer.

The film’s shimmering cinematography is credited to both Oliver T. Marsh (The Women) and Joseph Ruttenberg (Mrs. Miniver). Direction is by Noman Taurog (Room for One More).

Kino Lorber has released Carole Lombard Collection II, comprised of the three films the screen legend made just before her Oscar-nominated performance in 1936’sMy Man Godfrey.

Whereas the three films offered in Kino Lorber’s first collection consisted of films made prior to Lombard crystalizing her screen persona with 1934’s Twentieth Century, these films, two from Paramount and one from Universal, were made between 1935 and 1936 when the actress was at the height of her career.

1935’s Hands Across the Table finds Lombard playing a manicurist and fast-rising Fred MacMurray a loafer, both looking to marry for money but falling in love with each other in this romantic comedy directed by Mitchell Leisen (Hold Back the Dawn) with his usual aplomb thanks to the gorgeous cinematography of Ted Tetzlaff (Notorious). Ralph Bellamy heads the supporting cast as Lombard’s wealthy confidante confined to a wheelchair.

1936’s Love Before Breakfast, which Lombard made at Universal between the two Paramount films, was directed by Walter Lang (The King and I) with cinematography again provided by Ted Tetzlaff A hit at the time, it does not hold up as well as the other two films in the collection. Leading man Preston Foster plays his character as such a conceited, obnoxious jerk that it’s difficult to see why Lombard would choose him over rock solid Cesar Romero.

1936’s The Princess Comes Across in which Lombard again stars opposite Fred MacMurray, is the best of the three. It’s a sparkling comedy as well as a murder mystery in which down-on-her-luck actress Lombard masquerades as a Swedish princess traveling on an ocean liner from Europe to the U.S. accompanied by acting coach Alison Skipworth pretending to be her lady in waiting. MacMurray plays a concertina-playing bandleader and singer. Lombard’s spot-on mimicking of Greta Garbo’s voice is constantly hilarious.

This week’s U.S. Blu-ray releases include Quick Change and Another Thin Man.