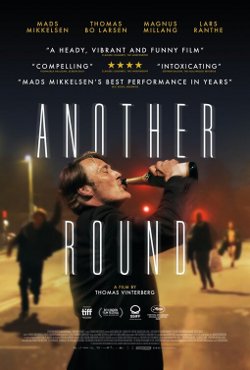 Another Round is another masterpiece from Danish director Thomas Vinterberg (The Celebration, The Hunt) who has achieved the rare distinction of being nominated for a Best Directing Oscar for a film also nominated for Best Foreign Language Film, or as it is now called, Best International Feature Film.

Vinterberg, who also directed the stunning 2015 remake of Far from the Madding Crowd, stuns once again with this fascinating take on the alcohol-infused culture of the Danes. A comedy with a punch, the film is about four middle aged male teachers at a Danish high school who decide to take seriously the notion that their lives could be improved by maintaining a constant level of alcohol. At first it works as their humdrum routines suddenly have a spark to them. Their teaching skills improve. Their love lives and family relationships improve. Then things spiral out of control. Their drinking escalates. Marriages break up, one of the four even dies while drunk. They stop the insanity, but only for a little while.

Mads Mikkelsen and Thomas Bo Larsen are long time veterans of Vinterberg’s films and are fascinating to watch, but so are Magnus Milland and Lars Ranthe as the other members of the quartet. The rest of the players are superbly cast as well.

Based on a play Vinterberg had written years earlier in Vienna, it was filmed at the urging of his daughter, Ida, who was to have played Mikkelsen’s daughter in the film but was killed in a car crash four days into the filming before her scenes could be filmed. The character was changed to a second son for Mikkelsen’s character. The classroom scenes were filmed in her school with her classmates as extras. The film is dedicated to her.

Another Round is available on both Blu-ray and standard DVD.

One of the most romantic films of all time, Frank Borzage’s 1937 masterpiece History Is Made at Night, never had a DVD release in the U.S. Now, it has been given a 4K restoration for its Blu-ray release by the Criterion Collection and looks smashing.

Borzage, the first director to win an Oscar (for 1927’s 7th Heaven) and the first to win two Oscars (his second was for 1931’s Bad Girl), had not had a hit since 1932’s A Farewell to Arms when given the chance to direct History Is Made a Night by producer Walter Wanger who was a member of Borzage’s polo team. Borzage fell in love with the title, but soon discovered the film had no script. It took six writers to come up with one which was changed when the film was nearly completed, necessitating the re-filming of the opening scenes to fit the narrative of the closing scenes which take place aboard a ship on its maiden voyage that runs into an iceberg. No, it’s not the Titanic, but its fate could be the same, were it not for the fact that this is a comedy and a very fine one.

Charles Boyer had been making films in Hollywood as well as his native France for some time, but he always seemed a bit stiff in his Hollywood films. Here, however, thanks to Borzage’s hands-off direction, he is allowed to breathe and act naturally. The result is one of the screen’s great romantic characters, a head waiter who falls in love with the unhappy wife of a millionaire whose husband will stop at nothing, including murder, to keep her from leaving him. Jean Arthur (Easy Living), at her most charming, is the woman and Colin Clive, in full Frankenstein mode, is the husband. Leo Carrillo (Viva Villa!) co-stars as Boyer’s friend, “the world’s greatest chef.”

Clive died of pneumonia brought on by chronic alcoholism shortly after release of the film. Boyer ironically received his first Oscar nomination for one of his stiffest performances as Napoleon in that year’s Conquest opposite Greta Garbo instead of for his greater performance here.

The Blu-ray comes with two documentaries on Borzage and an audio recording of a 1960 interview with the director and a 1940 radio adaptation of the film with Boyer.

Warner Archive has released a Blu-ray of Victor Saville’s 1947 film, Green Dolphin Street, MGM’s most lavish film since Gone with the Wind.

Noted primarily for its Oscar-winning special effects, the film’s nearly two-and-a-half-hour narrative focuses on Lana Turner and Donna Reed as two sisters and Richard Hart as a naval officer who loves one, but in a drunken stupor writes a letter of proposal to the other one, having gotten their names mixed up. Van Heflin is his business partner, Frank Morgan his father, Gladys Cooper and Edmund Gwenn the girls’ parents, and Dame May Whitty the mother superior of the convent where the rejected sister goes for solace. The story may be contrived, but the New Zealand-based earthquake, tidal wave, and Maori uprising, which won the film its special effects Oscar, are worth waiting for.

Warner Archive has also released a restored Blu-ray of the 1932 two-strip technicolor horror film Doctor X. The film deftly combines the mad scientist and haunted house narratives of classic horror films with Lionel Atwill in his film debut, Fay Wray in her first screaming role, and Lee Tracy as a wisecracking reporter. Atwill and Wray would return for 1933’s The Mystery of the Wax Museum, recently released by Warner Home Video in an equally fascinating restoration, with Glenda Farrell in lieu of Tracy as a wisecracking reporter in that one. Extras include the black-and-white version of Doctor X filmed at the same time as the color version but at different angles for release of the film outside of major U.S. cities.

Kino Lorber’s Western Classics II Blu-ray gives us three lesser known 1950s westerns, The Redhead from Wyoming, Pillars of the Sky, and Gun for a Coward.

Little remembered director Leo Sholem directed 1953’s The Redhead from Wyoming between Superman and the Mole Men and Ma and Pa Kettle at Waikiki and this one is no more distinguished than those films with Maureen O’Hara cast against type as a saloon hostess who is “in” Wyoming but “from” somewhere else. Alex Nicol is the sheriff, William Bishop the crooked politician. For O’Hara completists only.

1956’s Pillars of the Sky was directed by George Marshall (Destry Rides Again) and provides fascinating insight into the effects of Christianity on native Americans in the late 1870s, both good and bad. It doesn’t go far enough in its examination, but what’s there is good with nominal leads Jeff Chandler and Keith Andes as the soldiers fighting over Dorothy Malone, while character actors Ward Bond and Lee Marvin steal the show, the former as a minister, the latter as a veteran soldier who has seen too much.

Abner Biberman’s 1957 film Gun for a Coward stars Fred MacMurray, Jeffrey Hunter, and Dean Stockwell as brothers left in charge of a sprawling ranch after the death of their father. MacMurray is the strong one, Hunter the sensitive one, and Stockwell, in his first grownup role, the headstrong one. The casting is a bit odd as MacMurray was nearing 50, Hunter 30 and Stockwell had just turned 20, but somehow it works. Janice Rule (3 Women) is outstanding as the woman who comes between MacMurray and Hunter.

This week’s U.S. Blu-ray releases include Memories of Murder and The Furies.