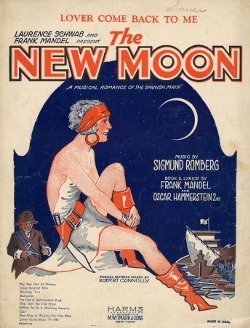 The first Blu-rays were introduced in 2006. Ever since then, there has been speculation as to which films, previously released on DVD, would be upgraded to the higher resolution Blu-ray discs. I have often speculated on this myself. This week, however, I am looking at the situation a little differently.

Most classic films are owned by Warner Bros. which controls all pre-1986 MGM and RKO films as well as those by Warner Bros. to the present, with a smattering of films produced by other studios also in the mix. At Warner’s current rate of upgrading five films per month, the odds are that they will not get around to releasing all their major films on Blu-ray before the format becomes extinct. With that in mind, I thought it might be interesting to look at films that Warner has put out on DVD that will likely never make it to Blu-ray.

Released in the first wave of musicals to come along after the introduction of sound in 1927, Sigmond Romberg’s operetta New Moon, with lyrics by Oscar Hammerstein II and others, was released by MGM at the end of 1930. It starred Lawrence Tibbett and Grace Moore, the first opera stars to be nominated for acting Oscars, albeit for other films. Tibbett was nominated for The Rogue Song, a lost film released earlier in 1930. Moore was nominated for the 1934 film One Night of Love.

New Moon is the name of the ship on which young Russian soldier Tibbett meets Moore’s princess, who is engaged to the local governor (Adolphe Menjou) who, learming of this assignation, assigns him command of a deadly fort where he is almost certain to meet his doom. Stirring music is the thing, here, and it reaches its exultant heights with Tibbett’s moving “Stouthearted Men” and Moore’s thrilling “Lover Come Back to Me”. It was remade ten years later with Jeanette MacDonald and Nelson Eddy, but this earlier, less glossy version seems fresher with its lesser-known stars.

Walter Huston starred in the 1926 stage version of the play about a wheelchair-bound would be-jungle chieftain who uses black magic to get revenge on the man who crippled him. MGM filmed it as a silent with Lon Chaney, Lionel Barrymore, and Warner Baxter as West of Zanzibar in 1928. Huston replaces Chaney, reprising his original role in the talkie with Conrad Nagel in Baxter’s role and C. Henry Gordon in Barrymore’s. As Leonard Maltin’s Classic Movie Guide opined, it’s not for the squeamish.

The second of three versions of Franz Lehar’s comic operetta, The Merry Widow was Ernst Lubitsch’s first for MGM. Lubitsch brought Maurice Chevalier from Paramount and gave him the starring role opposite Jeanette MacDonald having already directed the two together in 1929’s The Love Parade and 1932’s One Hour with You. The Lubitsch magic worked once again. MacDonald went on to a long career in MGM musicals, Chevalier went back to France, reemerging in Hollywood in the late 1950s.

MGM’s 1936 comedy Wife vs. Secretary reunited Clark Gable with his Red Dust co-star Jean Harlow as his secretary and his Manhattan Melodrama co-str Myrna Loy as his wife. May Robson played his mother and James Stewart in one of his earliest roles played Harlow’s fiancé. It’s highly watchable, but the stars are better than the material.

MGM gloss was still there to help Rosalind Russell, Don Ameche, Kay Francis, and Van Heflin through 1941’s The Feminine Touch, a farce about a woman (Russell) whose author husband (Ameche) disappoints her because he isn’t jealous of the time she spends with his publisher (Heflin) while failing to realize that Heflin’s assistant (Francis) wants him, not Heflin. It’s a pleasant time-killer but all four stars have been better in other things.

John Huston’s 1942 Warner Bros. film Across the Pacific brings the stars of Huston’s The Maltese Falcon, Humphrey Bogart, Mary Astor, and Sydney Greenstreet, together again in an early World War II thriller about a Japanese plot to start the war in the Pacific. Of all the films on this list, this probably has the best chance of seeing a Blu-ray release at some point. Bogart’s films are always popular, and this is easily the best not yet given one.

MGM’s 1950 musical Two Weeks with Love gave us Jane Powell as the teenager spending two weeks in the Catskills with her family. Louis Calhern and Ann Harding, who would next play Oliver Wendell Holmes and his wife in The Magnificent Yankee, were her parents. Debbie Reynolds, Billy Gray, and Tommy Rettig were her siblings. Ricardo Montalban played her love interest. The highlight of the film is Reynolds and Carlton Carpenter singing “Abba Dabba Honeymoon” which became a huge hit leading to Reynolds’ casting in Singin’ in the Rain. It’s great fun all around. A bonus on the DVD is Powell’s 45-minute 1995 TCM interview with Robert Osborne.

Frank Sinatra’s career was at its 1950s peak when he starred in MGM’s 1955 film version of the Broadway hit The Tender Trap in which he played a playboy Broadway stage agent. Debbie Reynolds played his latest discovery, David Wayne his childhood friend, and Celeste Holm his main squeeze. Despite some occasionally sparkling dialogue, the film is largely stage-bound with most of the action taking place in Sinatra’s apartment. Reynolds has more chemistry with Sinatra than she had with Dick Powell in the previous year’s Susan Slept Here, but like Powell, a leering Sinatra was too old for her. Best part is the opening shot of Sinatra coming toward the camera singing the title song, predating Julie Andrews in The Sound of Music by ten years. That scene is reprised nicely by all four stars over the end title.

Allied Artists’ 1959 circus film The Big Circus is a minor epic with Victor Mature as the circus owner, Red Buttons and Rhonda Fleming as agents assigned by his bank to watch him, Vincent Price as the ringmaster, Peter Lorre as a clown, and Gilbert Roland, Kathryn Grant, and David Nelson as trapeze artists. It’s enjoyable, but minor.

Warner’s 1966 adaptation of the Broadway play Any Wednesday stars Jason Robards as a slick business tycoon who has his company buy his mistress Jane Fonda’s apartment when it is turned into a condo, listing it as a business suite. All hell breaks loose when businessman Dean Jones is assigned the suite for his visit by Robards’ unsuspecting secretary, with Robards’ wife, Rosemary Murphy, catching wise. The three stars are fine, but Murphy, reprising her Tony-nominated performance, steals the film, which is nicely opened-up with its filmed-in-New York locales.

This week’s U.S. Blu-ray releases include Ammonite and The Freshman.