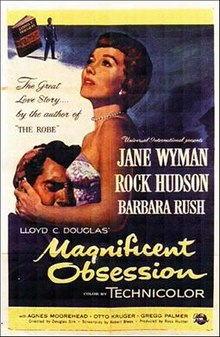 Magnificent Obsession, from Lloyd C. Douglas’ best-selling novel, was a huge hit for Universal when the studio first made it in 1935 as a vehicle for Irene Dunne and Robert Taylor, directed by John M. Stahl. It became an even bigger hit in 1954 when Universal remade it as a vehicle for Jane Wyman and Rock Hudson, directed by Douglas Sirk.

Both Criterion’s original DVD in 2006 and their new 2019 Blu-ray release contain both films, although advertising for the set, including the DVD and Blu-ray covers, is for the 1954 version only. This is in complete opposition to Universal’s own dual 2008 DVD and subsequent 2017 Blu-ray releases of Stahl’s 1934 version of Imitation of Life and Sirk’s 1959 remake, for which both versions were given equal promotion.

Sirk, whose credits also include All That Heaven Allows, Written on the Wind, and The Tarnished Angels, long ago became a cult figure, but Stahl, whose credits also include Holy Matrimony, The Keys of the Kingdom, and Leave Her to Heaven, was an equally fine director whose films deserve the same level of respect and interest that Sirk’s now command.

Having watched both versions of Magnificent Obsession in the new Criterion release, my impression is that the Blu-ray restoration of Sirk’s color version doesn’t really add a lot to the previous DVD release, but the restoration given Stahl’s black-and-white version really pops in its shimmering upgrade to Blu-ray.

Author Douglas, a former minister turned writer, is best remembered for The Robe, which in 1953 became the first film released in Cinemascope spurring renewed interest in Magnificent Obsession. The remake made a top box-office star of Hudson as the playboy-turned-surgeon and earned Wyman an Oscar nomination as the woman whose husband’s death was due in part to Hudson’s drunkenness and who is later responsible for the accident in which she is blinded. It’s pure soap opera but played with consummate skill by the stars as well as Agnes Moorehead, Barbara Rush, and Otto Kruger in support that you tend overlook its shortcomings. Sara Haden, Anita Louise, and Ralph Morgan had those parts in the 1935 version in support of Taylor as the playboy and Dunne as the victim.

Douglas himself did not like the 1935 version, which dumped most of his spiritual tropes, concentrating instead on the implausible soap opera events of the story. The author, who died in 1951, wouldn’t have been any happier with the remake which was culled from the screenplay for the first film rather than the source novel.

Most critics give the edge to Wyman over Dunne as having given the better performance, noting her Oscar nomination as proof, but Dunne was equally fine. Although she wasn’t nominated for her performance in the film released in Los Angeles in 1936, Dunne also had Show Boat and Theodora Goes Wild in release that year, earning an Oscar nomination for the latter instead.

Advertised as the first great movie musical of the 1970s upon its release in 1969, Sweet Charity was not that. It was, in fact, a great big flop, although there were those who admired Bob Fosse’s direction and Shirley MacLaine’s star performance.

MacLaine sings and dances her heart out in scenes that go on a bit much in this musical remake of Federico Fellini’s The Nights of Cabiria, but her character lacks the poignancy and ultimately the believability of Giulietta Masina’s heartfelt portrayal of the Italian prostitute, turned into a dance hall girl here.

Kino Lorber’s dual Blu-ray release of the film’s roadshow presentation and alternate cut are first rate. If only the material were better. John McMartin has the principal supporting role of MacLaine’s dull almost-husband while Ricardo Montalban, Sammy Davis Jr., Chita Rivera, and Paula Kelly are all pretty much wasted in what amount to extended cameos. Fosse, though, would redeem himself with his next film, 1972’s Cabaret.

Finally on Blu-ray, the film captures three distinct gone-by eras in the telling of its story, the World War I years in which Whale’s experiences paralleled those in his later Journey’s End, Hollywood filmmaking in the 1930s particularly in the making of Frankenstein and The Bride of Frankenstein, and the never-ending feud between Hollywood’s two iconic gay directors of the 30s, Whale and George Cukor, still at odds with one another in the mid-50s.

David Mamet’s highly regarded 1997 film The Spanish Prisoner is finally on Blu-ray as well. Steve Martin, Campbell Scott, Rebecca Pidgeon, Ricky Jay, Ben Gazzara, and Felicity Huffman star in the complex thriller involving multiple scams from the writer of Glengarry Glen Ross and Wag the Dog. It’s quite preposterous, but great fun if you don’t take it too seriously.

Critics in 1981 were not kind to Franco Zeffirelli’s Endless Love, but the director’s modern take on Romeo & Juliet, which he filmed in 1968, holds up surprisingly well. Martin Hewitt, who made his film debut as the 17-year-old boy in love with 15-year-old Brooke Shields, did not have much of a career as an actor. This was his only starring role, but he is very convincing as the boy who goes mad when his girlfriend’s father forbids him to see her.

Hewitt, who gives an extended on-camera interview on the Shout Select Blu-ray was said to be 19 when the film was made, but was 22 at the time, 23 when it was released while Shields was her character’s actual age of 15. Their age difference was the main cause of concern at the time given their extensive nude scenes even though Shields’ were performed by a body double.

The best performances in the film were those of Shirley Knight and Don Murray as Shields’ parents, while Beatrice Straight and Richard Kiley have less to do as Hewitt’s parents.

Arrow Academy has given William Friedkin’s 1980 film Cruising a color corrected Blu-ray release supervised by director Friedkin. The film, about a series of murders in the S&M gay community of New York at the time, looks better than it ever has, but the story is still the same confused mess it was when it was in theatres and in the headlines of New York’s newspapers covering the film’s many protests. Al Pacino is the undercover cop who may be a copycat killer himself at the end of the film.

This week’s new releases include Rocketman and Godzilla: King of the Monsters.