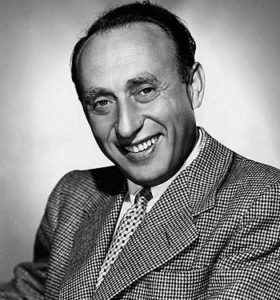 Born September 19, 1901, in a town in Austria-Hungary that is now part of Romania, József Paszternák, known professionally as Joe Pasternak, was one of eleven children of a town clerk. He emigrated to the US as a teenager in 1920 and stayed with an uncle in Philadelphia. He had a variety of jobs while studying acting in New York.

In 1922, Pastnak got a job as a busboy at Paramount Studios in Astoria, Queens and quickly rose to head waiter before quitting to become an assistant to director Allan Dwan. He worked as assistant director on 1925’s The Phantom of the Opera and 1926’s It’s the Old Army Game. He then directed a two-reel comedy starring El Brendel before going to work for Wesley Ruggles at Universal.

Universal sent Pasternak to Europe as associate producer on films made in Germany and Hungary. He returned to the U.S. in 1936, brining with him director Henry Koster. After seeing 14-year-old Deanna Durbin in the short, Every Sunday, he cast her in Three Smart Girls directed by Koster, the film that saved Universal from bankruptcy. As such, he was nominated for the Irving G. Thalberg Honorary Award at the 1938 Oscars. He would make ten films with Durbin including Mad About Music, That Certain Age, First Love and It Started with Eve.

While at Universal, Pasternak was also instrumental in reinventing Marlene Dietrich’s screen persona beginning with 1939’s Destry Rides Again. He produced two more Dietrich films before moving on to MGM in 1941.

Previously married to Margaret Flander in 1931, Pasternak married second wife, actress Dorothy Darrell in 1942 with whom he would have four children including son Michael, better known as the disc jockey, Rosko.

At MGM in the 1940s, Pasternak produced such hits as Presenting Lily Mars for Judy Garland, Thousands Cheer for Kathryn Grayson, Music for Millions for Margaret O’Brien, Thrill of a Romance for Esther Williams, the Oscar nominated Anchors Aweigh for Gene Kelly, Frank Sinatra and Grayson, A Date for Judy for Jane Powell, In the Good Old Summertime for Garland and Van Johnson and That Midnight Kiss for Mario Lanza and Grayson.

Joe Pasternak’s last produced film was 1968’s The Sweet Ride. He died from complications of Parkinson’s Disease on September 13, 1991, six days before what would have been his 90th birthday.

Considered all washed up after a decade of playing cool sophisticates, Pasternack’s casting of Marlene Dietrich as dance hall hostess Frenchy opposite rising star James Stewart revitalized her career. Her song, “The Boys in the Back Room” became her second best-known song after “Falling in Love Again” from The Blue Angel. Considered a comedy as well as a western, her unchoreographed catfight with Una Merkel remains one of the most iconic comic scenes in film history. Dietrich’s off-screen romance with Stewart lasted from the start of filming and ending when production did.

IT STARTED WITH EVE (1941), directed by Henry Koster

Pasternak’s nurturing of the career of actress-singer Deanna Durbin reached its zenith with this comedy classic in which she more than held her own against Charles Laughton, one of the screen’s greatest scene-stealers. It was the last collaboration between the star, her producer, and her director. Koster had been brought to the U.S. by Pasternak with whom he first worked in Europe. After making this film, Pasternak would move to MGM where Koster joined him briefly before moving to Fox. Durbin would soldier on at Universal, retiring at 26 after filming 1948’s For Love of Mary.

At MGM, Pasternak oversaw the careers of Kathryn Grayson (Thousands Cheer, Anchors Aweigh) and Jane Powell (A Date with Judy, Nancy Goes to Rio) before turning to Ann Blyth here opposite Mario Lanza in the biggest hit of Pasternak’s career. He would cast her again in 1953’s The Student Price opposite Lanza, whose voice was used when Edmund Purdom took over the title role. He would return to Powell for Athena and Hit the Deck, neither of which were hits, while Blyth ended her on-screen singing with 1957’s The Helen Morgan Story.

Pasternak cast Doris Day against type as 1920s chanteuse Ruth Etting at the suggestion of James Cagney with whom he had previously appeared in The West Point Story. Cagney, who had been cast as her gangster husband, for the first and only time since becoming a star, gave up top-billing in a film where he and his co-star had more-or-less equal roles. Day was widely expected to earn her an Oscar nomination for her riveting performance and thrilling singing, but it wasn’t to be. Cagney, on the other hand, received his third nomination, his first since winning an Oscar for 1942’s Yankee Doodle Dandy.

WHERE THE BOYS ARE (1970), directed by Henry Levin

Connie Francis’ hit recording of the title song helped turn this comedy-drama about four college girls looking for romance in Fort Lauderdale, Florida during Spring Break into a box-office phenomenon. Francis and Paula Prentiss made their film debuts as two of the four with Dolores Hart and Yvette Mimieux rounding out the quartet. George Hamilton and Jim Hutton co-starred as two of the boys. Prentiss and Hutton went on to make four other films together, Francis went on to make two more films with “boys” in the title, and top-billed Hart left Hollywood three years later to become a nun. It was remade unsuccessfully in 1984.