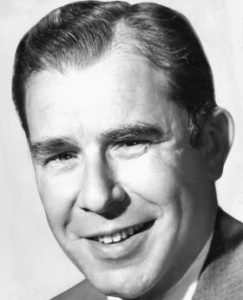 Born April 17, 1911, in South Bend, Indiana, George Stenius grew up in Detroit, Michigan. Determined to become an actor he joined a stock company rather than continue his education at Yale. In addition to his stage work, he voiced The Lone Ranger from its inception on Detroit Radio in 1933. He invented the Lone Ranger’s “Hi-yo, Silver!” catch-phrase because of his inability to whistle. That same year he sent a play he had written to MGM’s New York office. Irving Thalberg read it and hired him. Working first in New York, he changed his name to Seaton because it was easier to pronounce.

Starting out in Hollywood as a gag writer, Seaton quickly became a contributor to some of the best films of the late 1930s including A Night at the Opera, A Day at the Races, Stage Door, and The Wizard of Oz. After a brief stint at Columbia in 1939-1940, he moved to 20th Century-Fox where he stayed through 1950. There he received his first Oscar nomination for his screenplay for 1943’s The Song of Bernadette. He made his directorial debut with 1945’s Diamond Horseshoe, a Betty Grable starrer. He became one of the studio’s top directors with 1947’s Miracle on 34th Street starring Maureen O’Hara, John Payne, and Oscar winner Edmund Gwenn. He won an Oscar himself for his screenplay.

Moving to Paramount, Seaton directed Bing Crosby in his first two dramatic films, 1953’s Little Boy Lost and 1954’s The Country Girl co-starring Grace Kelly and William Holden. The latter film earned him Oscar nominations for Best Screenplay and Director. He won for Best Screenplay, his second Oscar in that category. His successes as producer only at Paramount included The Bridges at Toko-Ri reuniting Holden and Kelly, The Tin Star starring Henry Fonda and Anthony Perkins, and But Not for Me starring Clark Gable and Lilli Palmer. His Paramount films as director included The Proud and Profane starring Holden and Deborah Kerr, Teacher’s Pet starring Gable and Doris Day, The Pleasure of His Company starring Fred Astaire and Palmer. and The Counterfeit Traitor starring Holden and Palmer.

Along the way, he became president of the Screen Writers Guild, and later, the Academy of Motion Picture Arts and Sciences, earning the Academy’s Jean Hersholt Humanitarian Award in 1962.

The film was a small miracle unto itself. No one expected a Christmas movie released in June to be a hit, yet it was, becoming the favorite film of stars Maureen O’Hara and John Payne, the best thing Natalie Wood ever did as a child, and sending character actor Edmund Gwenn’s career into the stratosphere as the “real Santa Claus”. It also launched the career of obscure radio actress Thelma Ritter who got the part of a disgruntled Macy’s shopper because she had been a neighbor of Seaton’s wife. Hired for one scene, Fox, floored by her performance in previews, ordered Seaton to call her back for additional scenes. Oscars for Seaton (as writer) and Gwenn.

Seaton was nominated for the Grand Prize at the 1954 Cannes Film Festival. It also won a Golden Globe for Best Film Promoting International Understanding. Bing Crosby, in his first dramatic role, is sensational as the former American war correspondent searching for the child he was separated from in post-war France. Christian Fourcade as the 8-year-old who may or may not be his son is superb as well as are Nicole Maurey in flashbacks as his wife killed in the war, Claude Dauphin as his best friend and Gabrielle Dorziat as the Mother Superior of the orphanage where he finds the boy. This is a gem of a film that deserves better recognition.

Seaton’s second film for which he won an Oscar for Best Screenplay with one of his actors (Grace Kelly) also taking one home. Allegedly Kelly won over Judy Garland in A Star Is Born by just six votes. She won the role after Jennifer Jones backed out due to pregnancy. As good as she was in the role, the real revelation was Bing Crosby playing her alcoholic husband, an actor-singer given a chance at a comeback, for which he received his third and final Oscar nomination. William Holden is also strong as the director who despises Kelly before falling in love with her, much as audiences did the world over.

Seaton, who often worked with William Holden and Lilli Palmer got them together for this haunting, true-life tale of World War II double-agents. Holden’s Erich Ericson is similar to Liam Neeson’s Oscar Schindler in Spielberg’s Schindler’s List. Filmed in modern Germany where much of the action took place twenty years earlier, Holden has one of his best roles as does Palmer. Palmer had a late career triumph with 1960’s Conspiracy of Hearts in which she played a Mother Superior protecting her nuns and the Jewish children they hid. Here she plays an aristocrat unable to protect herself from Nazi tyranny.

One of the first films to earn more than $100 million at the world-wide box office, Seaton went out on top with this one, for which he received his final Oscar nomination (for Best Adapted Screenplay). Top-billed Burt Lancaster and Dean Martin were highly compensated for their performances, but the real stars of the film were the Boeing 707 on which most of the action takes place and the legendary Helen Hayes who won her second Oscar playing a little old lady stowaway. The film’s star-studded cast also included Jean Seberg, Jacqueline Bisset, George Kennedy, Van Heflin, and Oscar-nominated Maureen Stapleton.