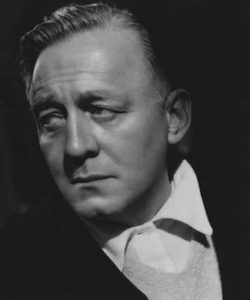 in Feltham, England, Edmund Goulding was the son of a butcher who objected to his son’s early acting and writing ambitions, wanting him to keep working in his butcher shop. It wasn’t until World War I, that he got his chance to escape his oppressive homelife by joining the Army. Wounded in battle, he emigrated to the U.S. in 1919 never to return.

As an actor, Goulding had made an impression in a highly controversial production of The Picture of Dorian Gray. As a playwright, he wrote numerous plays, one of which, The Quest of Life, was made into a film for which he wrote the screenplay in 1916. He continued as a screenwriter, first in England, and then in the U.S. The standout among his early works was his screenplay for 1921’s Tol’able David starring Richard Barthelmess.

Goulding’s first works as a director were 1925’s Sun-Up and Sally, Irene and Mary. His most famous silent film as a director was 1927’s Love, starring John Gilbert and Greta Garbo in an early version of Anna Karenina.

In 1929, Goulding wrote the screenplay for the Oscar winning Best Picture, The Broadway Melody, and directed Gloria Swanson to an Oscar nomination for The Trespasser. The following year he did the same for Nancy Carroll in The Devil’s Holiday. In 1932, he directed Grand Hotel to an Oscar win for Best Picture but was shockingly not among the nominees for Best Director. He would become the only director of an Oscar winning film never to have been nominated for anything himself.

Not a favorite of MGM chief Louis B. Mayor, Goulding would leave MGM after the 1936 death of his friend and protector, head of production Irving Thalberg.

The director’s final move would be to 20th Century-Fox in 1943 where he would remain until his death in 1959.

At Fox, Goulding’s greatest success was 1946’s Oscar nominated The Razor’s Edge which earned nominations for Best Picture as well as for Clifton Webb and Anne Baxter, with the latter winning. 1947’s Nightmare Alley starring Tyrone Power and Joan Blondell, now considered his masterpiece, was not a success in its original release. Other notable films he directed at Fox include 1950’s Mister 880 which earned Edmund Gwenn an Oscar nomination, 1956’s Teenage Rebel starring Ginger Rogers, and 1958’s Mardi Gras starring Pat Boone.

The first all-star cast film was the biggest box-office hit of its year. It was also Oscar’s only Best Picture winner not to be nominated for any other awards. Although Goulding would direct three Best Picture nominees and nine Oscar nominated performances, he himself would never be nominated. Greta Garbo uttering her famous “I want to be alone” line to John Barrymore and Joan Crawford doing her best to stay out of the clutches of Wallace Beery were but two of the film’s highlights. Garbo and Barrymore got on famously, Crawford and Beery did not. Crawford’s stenographer and Lionel Barrymore’s dying bookkeeper come off best.

Goulding had a reputation for being a woman’s director, but this all-male cast remake of Howard Hawks’ classic 1930 war film proved he was equally at home directing both sexes. Errol Flynn, Basil Rathbone, David Niven, Donald Crisp, Barry Fitzgerald, and Morton Lowry have the roles played by Richard Barthelmess, Neil Hamilton, Douglas Fairbanks, Jr., Edmond Breon, Clyde Cook, and Leon Janney in the original. Both films were based on the short story, The Flight Commandeer. Although several battle scenes were filmed specifically for this version, most of the aerial photography was imported from the original.

Goulding’s 1939 film, Dark Victory was his second film nominated for a Best Picture Oscar, as well as Best Actress (Bette Davis) and Best Score (Max Steiner). I, however, have always preferred this second 1939 outing in which he directed Davis. Dark Victory suffers from the lame performance of Ronald Reagan and the horrid Irish accent put on by Humphrey Bogart, but The Old Maid based on the 1935 Pulitzer Prize-winning play is pure magic from start to finish. Davis and Miriam Hopkins are at their best as feuding sisters with Jane Bryan heading the splendid supporting cast.

The film version of W. Somerset Maugham’s novel was Goulding’s third film to be nominated for a Best Picture Oscar. Tyrone Power’s first post-war film provided him with the unusual role of a young man who leaves fiancé Gene Tierney in his search for the meaning of life. A huge box office hit, it also received Oscar nominations for its distinct art direction and for the supporting performances of Clifton Webb as Tierney’s prissy uncle and Anne Baxter as a woman who turns to drink after the loss of her husband and child. Baxter won. The superb supporting cast also includes John Payne, Herbert Marshall, Lucille Watson, and Elsa Lanchester

Goulding’s now generally considered masterpiece was a flop when first released because audiences couldn’t accept Tyrone Power as a bad guy. It was rereleased in 1956 to better business and became popular on TV after Power’s premature death in 1958. It became even more popular with its 2005 DVD release. Power plays a mentalist whose deceit proves to be his downfall, ending in his taking the menial side show job of geek, the guy whose job it is to bite off the heads of chickens, followed by a studio imposed happy ending. Great support from Joan Blondell, Coleen Gray, Helen Walker, and Ian Keith.