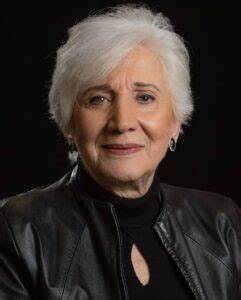 Born June 20, 1931 in Lowell, Massachusetts, Olympia Dukakis was the daughter of Greek immigrants. She was a first cousin of 1988 Presidential candidate Michael Dukakis (born 1933). Dukakis majored in physical therapy at Boston University, graduating with a BA. She practiced as a therapist during the polio epidemic, later returning to Boston University where she earned a Master of Fine Arts degree.

Primarily known as a theatre actress and director prior to exploding into the international consciousness with her Oscar-winning performance in 1987’s Moonstruck, Dukakis has had a long career in television as well as theatre and film, having made her TV debut in 1951 in Search for Tomorrow. She gave strong performances in 1962 episodes of The Nurses and Dr. Kildare, the same year she married her husband, actor Louis Zorich, with whom she had three children and to whom she would remain married until his death in 2018.

Dukakis made her Broadway debut as understudy to three other actresses in 1962’s The Aspern Papers. The following year she won an Obie for her performance in Off-Broadway’s A Man’s a Man.

Ever busy, Dukakis’ best remembered film role of the first decade of the new millennium was 2007’s Away from Her. In the second decade, she starred in 2013’s Cloudburst and the fourth mini-series in which she played transgendered lady Anna Madrigal in 2018’s update of Tales of the City. In 2020, she starred in the documentary, Olympia and completed work on several films prior to her death on May 1, 2021, one month before what would have been her 90th birthday.

Dukakis, at 56, is the heart of the film as Cher’s no-nonsense mother in the role that won her an Oscar and sent the career of an already legendary stage actress into an orbit from which she still hasn’t come down from. The film itself is a sparkling cocktail that proved once and for all that singer Cher could act, that Nicolas Cage could be tolerable in a film in which he does one of his weird accents because of the warmth around him, with good roles for Vincent Gardenia, John Mahoney, Danny Aiello and Anita Gillette, but mostly it’s Dukakis owning John Patrick Shanley’s witty, acerbic dialogue that makes it a film to watch over and over.

Sally Field as the mother of the bride and Dolly Parton as the owner of the salon where the women hang out are billed above them and Julia Roberts received an Oscar nomination as Field’s daughter with medical issues, but it’s Shirley MacLaine as a pushy woman you love to hate and Dukakis as the thorn in her side who own the film which in lesser hands might be just another “chick flick”. Daryl Hannah has the sixth important female role as a newcomer to the group of women while Tom Skerritt as Field’s obnoxious husband, Sam Shepard and Dylan McDermott have the principal male roles.

The focus of the film is on Julie Christie who won numerous awards and received an Oscar nomination for her moving portrayal of a woman suffering from Alzheimer’s. Knowing that she is losing her memory, Christie checks herself into a care facility. When Gordon Pinset as her devoted husband visits her thirty days later, she has completely lost her memory, doesn’t remember him and has become attached to a mute patient in a wheelchair played by Michael Murphy. Dukakis has several touching scenes playing Murphy’s wife with whom Pinset bonds over their mutual plight as spouses left in the dark.

Based on Fitzgerald’s 2010 play, this Canadian American co-production had successful runs in Canada and Australia, but was never released theatrically in the U.S. Had it been, Dukakis and Brenda Fricker would surely have been in the running for additional Oscars for their portrayals of an elderly lesbian couple from Maine, together 31 years, who decide to get married in Canada when same sex marriage becomes legal in that country. Ryan Doucette co-stars as a young hitchhiker they pick up along the way. Beautifully filmed in scenic Nova Scotia, the laughs keep coming even after a few tears have fallen along the way.

TALES OF THE CITY (2019), created by Lauren Morelli

Armistead Maupin wrote six novels depicting the lives of the characters in Anna Madrigal’s San Francisco boardinghouse turned apartment complex. The first three became successful mini-series for PBS in 1993, 1998 and 2001, respectively. This latest series for Netflix jettisons Maupin’s last three novels and substitutes a new story revolving around Madrigal’s 90th birthday and a secret the beloved transgendered woman has kept hidden since 1966. Although she is billed below Laura Linney, Ellen Page, Paul Gross, Murray Bartlett and Charlie Barnett, Dukakis, fabulous as ever as Madrigal, is the glue that holds it all together.