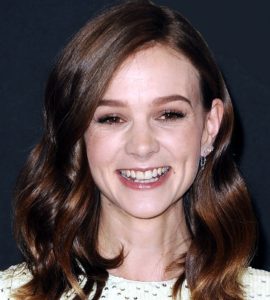 Born May 28, 1985 in London, England, Carey (Hannah) Mulligan is the second child and only daughter of hotel manager Stephen Mulligan and his wife, university lecturer Nano (nee Booth). The family moved to Germany when she was three when her father was transferred there. Her early education was at the international school in Dusseldorf where her brother was also a student. When she was six, she cajoled the school to give her a part in The King and Iin which her brother had a role. They gave a part in the chorus.

Mulligan and her family moved back to England when she was eight. She continued acting in school productions as a teen. She was inspired to become a professional actress when she attended Kenneth Branagh’s production of Henry V when she was 16. She applied to three different drama schools at 17 and was turned down by all three.

Mulligan finally made her professional acting debut on stage in 2004 in Forty Winks at the Royal Court Theatre in London. She made her film debut as Kitty Bennett in 2005’s Pride & Prejudice starring Keira Knightley. She then co-starred in the acclaimed 2005 miniseries, Bleak House and various other television productions until 2007’s When Did You Last See Your Father brought her back to the big screen. Two years later, she had first leading role in An Education opposite Peter Sarsgaard which brought her international acclaim and an Oscar nomination.

Much in demand following her Oscar nomination, Mulligan co-starred with Michael Douglas and Shia LeBeouf in 2010’s Wall Street: Money Never Sleeps, which led to a highly publicized affair with LeBeouf.

The actress received some of her strongest notices for 2010’s Never Let Me Go in which she co-starred with Andrew Garfield and Keira Knightley. In 2011, she starred opposite Ryan Gosling in Drive and Michael Fassbender in Shame for which she received various awards recognition. In 2012, she married singer Marcus Mumford with whom she had worked on 2013’s yet to be seen Inside Llewyn Davis. They have subsequently had two children together.

Before the release of Inside Llewyn Davis, Mulligan was a hit starring opposite Leonard DiCaprio in the third film version of The Great Gatsby in the coveted role of Daisy Buchanan. In 2015, she tackled Broadway with a Tony nominated performance in Sklight. That same year, she had standout roles in the fourth film version of Far from the Madding Crowd and in Suffragette in which she had star billing over Helena Bonham Carter and Meryl Streep.

Mulligan gave further acclaimed performances in 2017’s Mudbound and 2018’s Wildlife, but it was her sensational performance in 2020’s Promising Young Woman that brought her back to major awards recognition, including her second Oscar nomination. An early favorite to win the Oscar, she was still a strong contender when the envelope was opened, and the award went to Frances McDormand instead for Nomadland. Her most recent film was 2021’s The Dig. She has three films in pre-production. At only 35, chances are she will eventually win that elusive Oscar somewhere down the road.

AN EDUCATION (2009), directed by Lone Scherfig

Set in 1960s suburban London, this coming-of-age story about a teenager who falls prey to a playboy twice her age was Mulligan’s first starring role and the one that set her career in full motion. Nominated for 3 Oscars for Best Picture, Adapted Screenplay, and Actress, Mulligan also received Best Actress nominations from SAG, the Broadcast Critics and BAFTA, winning the latter. Also singled out for acting honors was Alfred Molina as Mulligan’s father. The first rate cast also includes Peter Sarsgaard as the playboy, Dominic Cooper, Rosamund Pike, Emma Thompson, Olivia Williams, Sally Hawkins, and James Norton.

Kazuo Ishiguro’s novel was Mulligan’s favorite book and she campaigned heavily for the lead role for which she won the British Independent Film Award for Best Actress while co-stars Andrew Garfield and Keira Knightley were nominated in support. Garfield was also a fan of the book and had hopes of purchasing the rights himself. Knightley was not a fan but agreed to make the film at her friend Mulligan’s request. The science-fiction film centered around the love triangle of the three lifelong friends played by the three stars. Garfield won the Best Supporting Actor award from the Academy of Science Fiction, Fantasy and Horror.

This was writer-director McQueen’s second film collaboration with star Michael Fassbender following 2008’s Hunger which marked McQueen’s feature film debut. Both Fassbender as a sex addict whose life begins to unravel after the arrival of his estranged sister and Mulligan as the sister borderline with personality disorder were nominated for numerous awards for their performances. Fassbender won several awards including the Independent Film Award for Best Actor for which Mulligan was nominated in support. Neither was nominated for an Oscar for the controversial film.

Mulligan received awards recognition once again including a nomination for Best Actress from the Independent Spirit Awards for her portrayal of a complicated wife and mother in Dano’s first film as a director. Dano’s co-star in 2013’s Prisoners was cast opposite Mulligan with whom he had starred in 2009’s Brothers. The real star of the film, however, is Ed Oxenbould in a breakout role as Mulligan and Gyllenhaal’s troubled son who must come to grips with his mother’s behavioral swings after his father abandons them to take a menial albeit dangerous job in the Montana wilds.

Classified as a crime drama, the only way to appreciate this instant classic is as a black comedy in which Mulligan plays a young woman traumatized by events in her past seeking vengeance on those who crossed her. Best Actress wins from the New York Film Critics and the National Board of Review made her an early favorite to finally win an Oscar after more than a decade as an also ran. Mulligan’s chances were put in question when she lost at the Golden Globes and SAG, and wasn’t eve nominated for a BAFTA. Still, she remained a favorite until Frances McDormand won her third Best Actress Oscar for Nomadland over her.