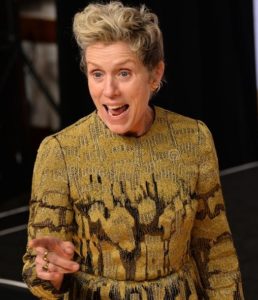 Born June 23, 1957 in Chicago, Illinois, Frances McDormand was the adopted daughter of Canadian-born parents, Noreen Eloise (Nickleson), a nurse from Ontario, and The Rev. Vernon Weir McDormand, a Disciples of Christ minister from Nova Scotia, who raised her in the suburbs of Pittsburgh. She began her stage career after graduating from Yale in 1982, appearing on Broadway in the 1984 revival of Awake and Sing!, the same year she made her film debut in Blood Simple, marrying the film’s director, Joel Coen.

In 1987 she played another supporting role in one of her husband’s films, Raising Arizona, in which the female lead was played by her college roommate, Holly Hunter. The following year, McDormand received a Tony nomination for playing Stella in a revival of A Streetcar Named Desire and an Oscar nomination for her portrayal of the wife of a racist deputy sheriff in Mississippi Burning.

Despite her Oscar nomination, McDormand languished in minor, often unbilled roles, until her iconic portrayal of the pregnant sheriff in Coen’s 1996 masterwork, Fargo, which brought her numerous awards including an Oscar for Best Actress. She also had important roles in that year’s Primal Fear and Lone Star. Despite the Oscar, however, it was back to supporting roles in films, two of which in 2000, brought her further awards recognition. She was recognized by various critics’ groups for her work in both Wonder Boys and Almost Famous, the latter bringing her a third Oscar nomination, her second in support.

It was another supporting turn, as a truck driving union rep in 2005’s North Country, for which she received her fourth Oscar nomination, that bring her back to prominence. Even so, it took another three years before she received starring roles in two films, Miss Pettigrew Lives for a Day and Burn After Reading. That same year she returned to Broadway as the star of a revival of The Country Girl for which she received a Drama Desk nomination, but no Tony recognition. In 2011, she would receive both a Drama Desk and a Tony award for Good People.

With 2014’s Olive Kitteridge, McDormand became a rare winner of acting’s triple crown when she won an Emmy to go along with her previously won Oscar and Tony.

McDormand had her best starring big screen role since Fargo in 2017’s Three Billboards Outside Ebbing, Missouri for which she won her second Oscar.

Three years later, McDormand was back with another starring role in Nomadland for which she became the first actress since Katharine Hepburn to win three Oscars for leading performances. With a second Oscar for producing the year’s Best Picture winner, she ties Hepburn with four, overall.

Frances McDormand and Joel Coen have been happily married for 26 years. Their son, Pedro McDormand Coen, was adopted from Paraguay in 1994.

With her multi-award-wining portrayal of the very pregnant small-town sheriff in Fargo, McDormand became the sixth actress Oscar nominated for a performance directed by her husband, after Elisabeth Bergner in Escape Me Never, Joanne Woodward in Rachel, Rachel, Jean Simmons in The Happy Ending, Gena Rowlands in A Woman Under the Influence, Gloria, and Julie Andrews in Victor/Victoria, and the first to win, a record she still holds. It remains one of the most iconic performances in screen history.

MISS PETTIGREW LIVES FOR A DAY (2008), directed by Bharat Nalluri

In her first starring role in a dozen years, McDormand played a middle-aged London governess who is unfairly dismissed from her job. She gets a new lease on life when she applies for a job as a social secretary to a ditzy singer played by Amy Adams. The two actresses, with their very different acting styles make this whirlwind romantic comedy into something special. Later in the year she played another lead in another comedy, the Coen Brothers’ Burn After Reading, for which she received a Golden Globe nomination. She proved her versatility once again by starring in a Broadway revival of The Country Girl the same year.

This award-winning mini-series provided McDormand with the role that earned her the third notch in the triple crown of acting awards, an Emmy to go along with the Oscar she won for Fargo and the Tony she won for Good People. She plays a middle school math teacher married to a pharmacist in a small New England town. The narrative explores their marriage over a 25-year period in which McDormand’s often harsh demeanor betrays the loving heart within. Richard Jenkins, John Gallagher Jr., Zoe Kazan, Ann Dowd, and Bill Murray head a uniformly fine supporting cast.

Expect McDormand earned her fifth Oscar nomination and second Oscar for her unforgettable portrayal of the grieving mother who takes matters into her own hands when local sheriff Woody Harrelson fails to find her daughter’s killer in this unsettling comedy-drama that was also one of the year’s best films. Harrelson was nominated for his performance, and Sam Rockwell won for his portrayal of McDromand’s nemesis turned friend. Lucas Hedges co-stars as her son. The strong ensemble cast also includes Peter Dinklage, Abbie Cornish, Kerry Condon, Zeljko Ivanek, and Clarke Peters.

McDormand’s passion project finds her as a fictionalized character in the film version of a book based on the writer’s real-life interviews with displaced Americans who live as nomads in their RVs, vans, trucks, and cars. Traveling across seven states in five months, McDormand drove her own van, which she slept in, and participated in many of the temporary jobs people in her situation have to make do with. The film was an odds-on favorite to win Best Picture and Director Oscars, which it did, and a long shot for Best Actress, which McDormand managed to pull off in one of the biggest surprises in Oscar history.