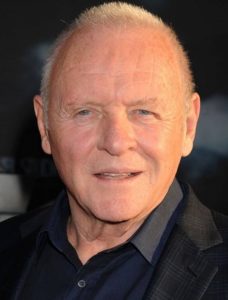 Born December 31, 1937 in Margam, Port Talbot, Wales to Muriel and Richard Hopkins, a baker, (Philip) Anthony Hopkins was encouraged to become an actor by Richard Burton, who was also born in Port Talbot and whom Hopkins met at the age of 15.

Hopkins made his professional stage debut in 1960 at the Palace Theatre in Swansea. After several years in repertory, he was spotted by Laurence Olivier who invited him to join the Royal National Theatre. His role in the 1967 TV version of A Flea in Her Ear led to his casting as Richard (the Lionheart) in 1968’s The Lion in Winter in support of Peter O’Toole and Katharine Hepburn and the start of a brilliant screen career.

Alternating between the theatre and screens large and small, he gave memorable performances over the next twenty-three years in such films as The Looking Glass War, When Eight Bells Toll, Young Winston, Magic, The Bounty and TV’s QB VII, The Lindbergh Kidnapping Case and, Victory at Entebbe, and The Bunker, The Hunchback of Notre Dame and Great Expectations.

Having won his first Emmy for playing Bruno Hauptmann in TV’s The Lindbergh Kidnapping Case in 1976, he would win a second as Adolph Hitler in 1981’s The Bunker and be nominated again for playing Quasimodo in 1982’s The Hunchback of Notre Dame and Magwitch in 1990’s Great Expectations.

He received his first Golden Globe nomination for playing the disturbed ventriloquist on screen in 1978’s Magic and was nominated again for the TV movie The Tenth Man ten years later. He would finally receive Oscar recognition for 1991’s The Silence of the Lambs, for which he won.

Hopkins reached a career pinnacle in the 1990s. He was acclaimed for his performances in 1992’s Howards End, 1993’s The Remains of the Day (his second Oscar nomination) and Shadowlands (as C.S. Lewis), 1995’s Nixon (his third Oscar nod as Richard Nixon); 1996’s Surviving Picasso (as Pablo Picasso); 1997’s Amistad (his fourth Oscar nod as John Quincy Adams) and 1999’s Titus (as Titus Andronicus). He was knighted on January 1, 1993, the day after his 55th birthday.

Still very much in demand in the early part of the 21st Century, his subsequent films have included Hannibal, The Human Stain; Proof, Fracture, The Wolfman and Hitchock, followed by a subsequent Emmy nomination for his role in 2016’s Westworld. He married third wife Stella in 2003.

The actor received his fifth Oscar nomination for playing Pope Benedict in 2019’s The Two Popes and his sixth nomination and second win for playing an elderly man suffering from dementia in 2020’s The Father, becoming the oldest acting winner ever at 83.

Anthony Hopkins remains an acting titan with more films in the works.

THE SILENCE OF THE LAMBS (1991), directed by Jonathan Demme

Hopkins’ portrayal of Hannibal Lecter AKA Hannibal the cannibal caused audiences as well as critics to go wild in their appraisal of a performance that is only 25 minutes long but so dominates the film that what is essentially a supporting role won him the year’s Best Actor Oscar as well as a slew of other awards. The film, a box office phenomenon, was the first and only horror film so far to win a Best Picture Oscar. It won five in all including Best Director and Actress (Jodie Foster). Hopkins reprised the role in Ridley Scott’s 2001 film, Hannibal opposite Julianne Moore in Foster’s role.

THE REMAINS OF THE DAY (1993), directed by James Ivory

Hopkins excels at playing the introverted Englishman, a role he played to equally brilliant effect opposite Emma Thompson in 1992’s Howards End for which she received her first Oscar under James Ivory’s direction. Reunited with Thompson and Ivory as well as Ivory’s producer partner Ishmael Merchant and screenwriter Ruth Prawer Jhabvala, Hopkins gives another exemplary Oscar nominated performance as a second-generation butler who gives his heart and soul to his employer realizing too late that his life has been largely wasted. Thompson is equally brilliant as the housekeeper whose affection he keeps at an arm’s length distance.

Hopkins has played many larger-than-life characters, real and fictional, throughout his career but his Oscar nominated portrayal of the 36th U.S. President was no one’s idea of ideal casting. Lane Smith and Beau Bridges who played Nixon in previous TV productions were more in keeping with the public’s idea of how the character should be played. It was difficult for many to get past Hopkins’ physical appearance, yet for those who make the effort, the actor delivers a mesmerizing performance as the conflicted paranoid politician and statesman. Joan Allen is every bit his equal in her Oscar nominated portrayal of his wife, Pat.

With Jonathan Pryce as the future Pope Francis and Hopkins as his predecessor, Pope Benedict XVI, this film centered around a fictitious secret meeting between the two popes from the writer of Bohemian Rhapsody and the director of The Constant Gardener was bound to be a critically acclaimed crowd-pleaser. Both Pryce and Hopkins are superb, each earning an Oscar nomination for their performance, Pryce for the first tiem and Hopkins for the fifth. The film expands beyond the Vatican to provide insight into the lives of the two men, particularly Francis played by Juan Minujin as a young man.

THE FATHER (2020), directed by Florian Zeller

Director Zeller wrote the French play on which the film is based. Christopher Hampton did the English translation for the London and Broadway stages. The two wrote the screenplay for the film for which they both won an Oscar. The film’s second Oscar went to Hopkins for his mesmerizing portrayal of an elderly man suffering from dementia. There have been films on the subject before, but nothing quite like this one which is told from the increasingly scary perspective the man succumbing to the disease. Oli Colman as his daughter and Jeremy Northam as her husband lead the stellar supporting cast.