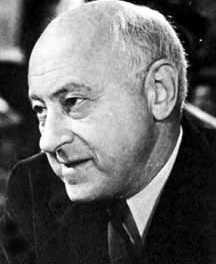 Born August 12, 1881 in a boarding house in Ashfield, Massachusetts where his parents had been vacationing for the summer, Cecil Blount DeMille was the son of Matilda Beatrice and Henry Churchill de Mille, a dramatist, actor and lay reader in the Episcopal Church. He was also an English teacher at Columbia, and a member of the board of the American Academy of Dramatic Arts. Cecil was the second of his three children.

Growing up, young DeMille was in the thrall of his father’s friends, David Belasco, Edwin Booth, and John Philip Sousa, along with New Jersey neighbor Annie Oakley. He began his own career as an actor in 1900. In 1902, he married actress Constance Adams when she was 28, and he was 20. They would eventually have four children, three of them adopted including Katherine DeMille, the future actress and wife of Anthony Quinn.

DeMille also wrote plays and eventually drifted away from acting into directing, becoming director-general of the Jesse L. Lasky Feature Play Company in 1913. In 1914, the Lasky Company moved into film and DeMille directed his first, 1914’s The Squaw Man. The Lasky Company became Paramount Pictures and DeMille became the most successful director of the silent era, culminating with 1924’s The Ten Commandments. He then left Paramount, but none of the films he made as an independent producer were successful except 1927’s The King of Kings, which he considered his favorite film.

The great silent screen director not only moved successfully into talking pictures, but came up with his own innovations, including a microphone boom and a soundproof camera blimp. He also popularized the use of the camera crane. His first three talkies, Dynamite, Madam Satan, and a remake of The Squaw Man were for MGM.

DeMille returned to Paramount with 1932’s The Sign of the Cross, a huge box-office success. After the failure of his two small budget 1934 films, This Day and Age and Four Frightened People, he would stick to big-budget extravaganzas for the remainder of his career.

Cecil B. DeMille died on January 21, 1959 at 77. He left his estate to his natural daughter, Cecilia, rather than his wife, Beatrice, who was dying of dementia. Beatrice died in 1960 at 86. Cecilia also died of dementia in 1984 at 75. Cecilia’s granddaughter, producer Cecilia DeMille Presley, carries on the family business.

The third film in DeMille’s biblical trilogy that also included 1924’s The Ten Commandments and 1927’s The King of Kings, this was the first DeMille film to receive an official Oscar nomination. It was nominated for Best Cinematography. Dynamite had received a write-in nomination. Fredric March, Elissa Landi, Charles Laughton (as Emperor Nero) and Claudette Colbert (as Poppaea, Nero’s wife) were the principal players in this pre-code classic that was cut for reissue in 1944. Happily, all the controversial scenes have long since been restored to their original glory.

DeMille’s epic sea adventure takes place off the shores of Key West Florida in the 1840s with Ray Milland, John Wayne, and Paulette Goddard in the principal roles. When rereleased in 1954, star billing was given to Wayne, originally seventh billed Susan Hayward, Milland and Goodard in that order. Raymond Massey, Robert Preston, and Lynne Overman had preceded Hayward on the original cast list, with Charles Bickford and Walter Hampden next in line. The giant rubber squid who plays an important role in the film was donated to the war department because of the rubber shortage during the war.

This is the film that was being made when Gloria Swanson visits the set of a DeMille film in the making in Sunset Boulevard. Victor Mature, who played Samson, refused to wrestle with a tame lion for the scene in which he supposed to kill a lion, forcing DeMille to use a stunt man against his better judgment. Hedy Lamarr, who played Delilah, was ten years older than Angela Lansbury who played her older sister. The supporting cast includes George Sanders, Henry Wilcoxin, Olive Deering, Fay Holden and a young Russ Tamblyn. Nominated for five Oscars, it won for its color art direction and costume design.

DeMille’s circus epic is the only one of his films to win a Best Picture Oscar. It is also the only one for which DeMille himself was nominated for Best Director. He took home both the Best Picture Oscar as the film’s producer and the Irving Thalberg honorary award, having previously won a career achievement award three years earlier. The year’s highest grossing film starred Betty Hutton and Cornel Wilde as trapeze artists, Charlton Heston as master of ceremonies, and Gloria Grahame as a lion tamer. James Stewart played a clown who never show his face. The film’s most famous set piece is an elaborate train wreck.

CECIL B. DE MILLE AND OSCAR