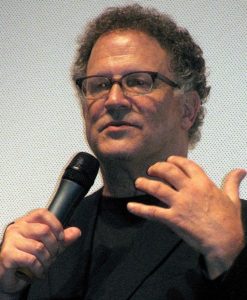 Born July 22, 1947 in Beverly Hills, California, Albert Lawrence Einstein, known professionally as Albert Brooks, was one of three sons of former actress Thelma Leeds and her husband, Harry Parke. Parke’s birthname was Einstein, Parke was his original stage name, but he was better known as Parkyarkarkus.

Brooks suffered an early trauma when his father collapsed and died after delivering his remarks at a Friars Club tribute to Lucille Ball and Desi Arnaz in 1958 at the age of 54. Brooks was just 11 years old.

The brilliant student attended Carnegie Mellon University in Pittsburgh but dropped out after a year to hone his comedic skills. He changed his name to Brooks at the age of 19 and began to appear regularly on variety and talk shows in the late 1960s and early 1970s. In 1975, he directed five short films for Saturday Night Live during its first season.

In 1987, after a two-year absence from the screen, Brooks finally received awards recognition for his work as an actor, earning his only Oscar nomination to date for his performance in Broadcast News. In 1990, he began his long association with the animated TV series, The Simpsons for which he wrote and voiced various characters through the present day.

Brooks didn’t make another film until 1991’s Defending Your Life, his fourth as a writer, director and actor. Off the screen for another three years, Brooks returned in two films in 1994, I’ll Do Anything and The Scout. In 1996, he wrote, directed, and starred in Mother for which he won both the New York Film Critics and National Society of Film Critics awards for Best Screenplay. In 1997, he married artist Kimberly Shlain with whom he has two children.

Brooks continued to appear on-screen in such films as Critical Care and Out of Sight, but also began to add voice work in film to his resumé. Among the latter were 1998’s Doctor Dolittle, 2003’s Finding Nemo, and 2007’s The Simpsons Movie. His performance in 2011’s Drive earned him numerous acting nominations and awards despite the lack of an Oscar nomination. In recent years, he’s been seen on-screen in A Most Violent Year and Concussion and been heard in The Little Prince and Finding Dory.

Albert Brooks’ last film to date was 2017’s I Love You, Daddy for which he provided voicework. He remains a major talent at 73.

Nominated for 7 Oscars, this hilarious sophisticated comedy starred William Hurt and Albert Brooks as rival reporters, one handsome and suave, the other talented but not somewhat lacking in looks. They are competing for a job as star newscaster Jack Nicolson’s replacement. Brooks played the latter. The famed scene where he is given his big break but loses it due to his nervous on-air sweating was Brooks’ idea, having observed a CNN reporter doing just that the night before, the script only calling for “something” to happen. Hurt, Brooks, and Holly Hunter all received Oscar nominations for their performances.

Brooks’ fourth of five films that he wrote, directed, and starred in, is considered his masterpiece. His deft dialogue has never been put to better use in this sweet comedy in which he plays a recently deceased man being judged to determine whether he moves on in the afterlife or must return in another body to get it right. Meryl Streep, at her most disarming, is the gentle soul he meets and falls in love with while in Judgment City. Rip Torn as his defender, and Lee Grant as his prosecutor are also at their best. There is even a scene in which he pays tribute to father, Paryarkarkus, a stand-up comic who literally died on stage.

Brooks plays a neurotic, twice-divorced sci-fi writer who moves back in with his mother to solve his personal problems in this one. It works remarkably well, thanks to the casting of Debbie Reynolds as his delightfully droll mother, but oddly Reynolds, who Brooks knew from his long-time relationship with her daughter, Carrie Fisher, was not his first choice for the role. She was considered only after Nancy Reagan, Doris Day, Kathryn Grayson, and Esther Williams, all turned it down. She was nominated for a Golden Globe for Best Actress and won the Satellite award for Best Supporting Actress.

Brooks was at the height of his prowess playing against type as a cutthroat crime lord who hires moonlighting stunt man Ryan Gosling to be his getaway driver in this high-octane thriller with bravura performances by Gosling and Carey Mulligan as his innocent lover. All three earned awards recognition but oddly none of them were nominated for an Oscar. The strong supporting cast includes Ron Perlman as Brooks’ hit man, Bryan Cranston as Gosling’s mentor, and Oscar Isaac as Mulligan’s ex-husband. Among Brooks’ many citations for his performance was a Golden Globe nomination for Best Supporting Actor.

In addition to his many other talents, Brooks is an accomplished voice actor, having honed that talent voicing numerous characters in the long-running TV series, The Simpsons beginning in 1990. His most famous voice character was probably Marlin in 2003’s Finding Nemo opposite Ellen DeGeneres, however there were no awards for voice actors in those days. By the time Finding Dory, the sequel to Finding Nemo, rolled around fourteen years later, there were such awards and Brooks received the lion’s share of them along with his voice role in the same year’s The Little Prince.