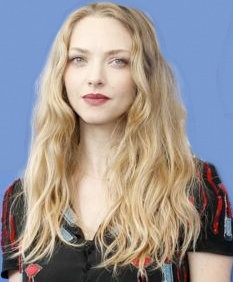 Born December 3, 1985 in Allentown, Pennsylvania to occupational therapist Ann and pharmacist Jack, Amanda Seyfried began modeling at 11 and ventured into acting at 15 with roles in the TV soap operas, As the World Turns from 1999-2001 and All My Children in 2003. She made her film debut in Mean Girls in 2004, taking a secondary role after auditioning for the lead roles which went to Lindsay Lohan and Rachel McAdams.

Following her film debut, Seyfried auditioned for the title role in the TV series, Veronica Mars, losing to Kristen Bell, but accepting the role of the character’s murdered friend instead. Her character, Lilly Kane, proved so popular she continued to play the role in flashbacks from 2004-2006. During this period, she turned up in guest starring roles on such series as Law and Order: SVU, House, and CSI: Crime Scene Investigation while appearing in such films as Nine Lives, American Gun and Alpha Dog. Her breakthrough came with her starring role in the HBO series, Big Love, a role that she played through 2010.

Seyfried’s first starring role on the big screen was in 2008’s Mamma Mia! . She had two highly publicized follow-ups in 2010’s Dear John opposite Channing Tatum and Letters to Juliet opposite Christopher Egan and Gael Garcia Bernal, but neither romantic comedy lived up to expectations at the box-office.

Set to appear in 2011’s Albert Nobbs, Seyfried was forced to drop out due to her commitment to star in Catherine Hardwicke’s Red Riding Hood opposite Gary Oldman. She had her name over the title in the 2012 thriller, Gone, which was a major box-office flop. Later that year, however, she was one of the stars of the Oscar nominated Les Misérables which became a world-wide smash hit.

In 2013, Seyfried played the bride in the flop comedy The Big Wedding with Robert De Niro, Diane Keaton, and Robin Williams. That same year she voiced one of the main characters in the animated hit, Epic and as Linda Lovelace in the biographical Lovelace. She also became the face of Givenchy in their ads around the world.
In 2015, the actress appeared opposite Mark Wahlberg and Seth MacFarlane in the hit comedy, Ted 2. In 2017, she starred opposite Ethen Hawke in Paul Schrader’s critically acclaimed hit, First Reformed. That same year, she married fellow actor Thomas Sadoski with whom she has since had two children. In 2018, she starred in the sequel to Mamma Mia! , called Mamma Mia! Here We Go Again.

In 2020, Seyfried voiced one of the characters in the animated feature, Scoob! and starred opposite Kevin Bacon in the horror film, You Should Have Left before appearing as the legendary Marion Davies in David Fincher’s Mank for which she has received various awards and her first Oscar nomination.

Amanda Seyfried has two films in post-production, Things Heard and Seen opposite James Norton and A Mouthful of Air opposite Finn Wittrock. She remains ever busy at 35.

The film version of the smash hit London and Broadway musical was the biggest hit of Meryl Streep’s career. The plot follows that of the 1969 film, Buona Sera, Mrs. Campbell. Seyfried plays the 20-year-old bride-to-be who is determined to find out which of her singer mother’s (Streep) three boyfriends at the time was her father – they are played by Pierce Brosnan, Colin Firth and Stellan Skarsgard. Julie Walters and Christine Barnaski are Streep’s fellow girl group singers. The film replaced Titanic as the highest grossing film in U.K. history, outgrossed in turn the following year by Avatar.

This romantic comedy deserved to be a bigger hit than it was. Seyfried plays an aspiring writer who while vacationing in Verona, finds a 50-year-old letter to Juliet from a heartsick young woman and makes it her mission to help the now elderly writer of the letter find her true love. Vanessa Redgrave and Franco Nero, who reunited in real-life not long before, have those roles. Along the way, Seyfried falls in love with Redgrave’s grandson, Christopher Egan, ditching self-absorbed boyfriend Gael Garica Bernal in the process. The film is based on the real-life “secretaries of Juliet” who respond to requests for Juliet’s intercession on their behalf.

The film version of the 1985 London, 1987 Broadway musical was released 150 years after Victor Hugo’s was published. Nominated for eight Oscars, it won three for Makeup and Hairstyling, Sound Mixing and Best Supporting Actress Anne Hathaway as Fantine. Seyfried played Fantine’s daughter, Cosette, raised by Jean Valjean (Oscar nominated Hugh Jackman). Although she gets to sing several songs, the best and best-known songs in the score are not sung by her character, putting her at a disadvantage in the company of Jackman, Russell Crowe, Eddie Redmayne, Aaron Tveit and Samantha Barks but she more than holds her own, nonetheless.

Ethen Hawke justly won numerous awards for his portrayal of a tormented upstate New York minister. Seyfried plays a new congregant to his church, a pregnant young woman who asks him to counsel her husband, a radical environmentalist concerned about bringing another life into what he sees as a world doomed because of man’s involvement in climate change. As he becomes more and more involved in the lives of Seyfried and her husband, Hawke spirals further down in the throes of his PTSD which first surfaced after the death of his son in war and the subsequent divorce from his wife. Hawke and Seyfried are riveting throughout.

Nominated for ten Oscars, Fincher’s black-and-white film about the writing of Citizen Kane by Herman J. Mankiewicz, the legendary Hollywood writer at the behest of Orson Welles who later battles him for sole credit of the then future Oscar winning script. The screenplay was written by Fincher’s late father. The film’s ten Oscar nominations include those for Best Picture, Director, Actor (Gary Oldman as Mankiewicz), Supporting Actress (Seyfried as Marion Davies), Cinematography, Production Design, Costume Design, Makeup and Hairstyling, and Sound, making it the year’s most nominated film.