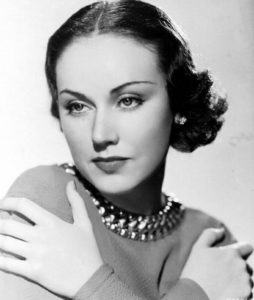 orn September 15, 1907 in Alberta Canada to Mormon parents, Fay Wray was one of six children who moved to Salt Lake City, Utah with their parents in 1912, relocating to Los Angeles in 1919 where the aspiring actress attended famed Hollywood High.

Wray made her film debut at 16 in the 1923 short, Gasoline Love. She made her feature film debut in 1925’s The Coast Patrol. She was in two dozen more films and shorts within the next two years before landing her first starring role opposite Erich von Stroheim in his 1928 film, The Wedding March. That same year, she married screenwriter John Monk Saunders (Wings).

Wray starred in two of 1929’s biggest hits, The Four Feathers and Thunderbolt. Saunders won a 1930 Oscar for Best Original Story for The Dawn Patrol. Under contract to Paramount, most of Wray’s films were on loan-out to other studios. Her reputation as film scream queen was the result of four classic films that she made between 1932 and 1933, Dr. X, The Most Dangerous Game, Mystery of the Wax Museum, and King Kong. She became a naturalized U.S. citizen in 1933.

For a long time, Wray was taken aback by the popularity of King Kong, wishing audiences would be more appreciative of the work she did on other films such as 1934’s Viva Villa! and The Affairs of Cellini.

Wray and Saunders’ daughter, Susan was born in 1936. They were divorced in 1939. Saunders died in 1940. Wray’s only significant film during this period was 1941’s Adam Had Four Sons in which she had a supporting role. In 1942, she married screenwriter Robert Riskin, by then a four-time Oscar nominee and winner for his screenplay for It Happened One Night. Riskin adopted Susan and together, he and Wray had two more children, Robert, born in 1943, and Victoria, born in 1945.

Wray was off the screen from 1942-1953 when she returned in supporting roles in such films as 1953’s Small Town Girl, 1955’s The Cobweb and Queen Bee, 1956’s Hell on Frisco Bay and Rock, Pretty Baby, and 1957’s Crime of Passion and Tammy and the Bachelor. From 1958-1965, she could be seen in guest appearances on TV, most memorably in three different episodes of Perry Mason.

Riskin died in 1955. Wray was later married to New York neurosurgeon Sanford Rothenberg from 1971 until his death in 1991. She turned down the role of the elderly Rose in 1997’s Titanic which earned her contemporary Gloria Stuart an Oscar nomination. The then 90-year-old Wray was present at that year’s Oscars in 1998 when host Billy Crystal paid tribute to her to thunderous applause. She appeared on-screen as herself in 2004’s Broadway: The Golden Age having been in several plays on Broadway early in her career.

Fay Wray died on August 8, 2004 at 96. Two days later, the lights of the Empire State Building, where she memorably said adieu to King Kong, were lowered in her honor.

Wray’s first starring role was as the heroine in von Stroheim’s epic film that began shooting in 1926. The actor-director plays an impoverished prince and commander of a cavalry regiment. Wray plays the daughter of a noble family who catches his eye during a parade. Their romance is thwarted by a jealous butcher who wants to kill von Stroheim and marry Wray. Von Stroheim agrees to marry ZaSu Pitts, the daughter of a wealthy family and Wray agrees to marry the butcher to keep him from killing von Stroheim. The sequel, Honeymoon once combined with The Wedding March as one film is now considered lost.

MYSTERY OF THE WAX MUSEUM (1933), directed by Michael Curtiz

This two-strip color film was a mess until recently restored by the UCLA film lab. It was so bad that it was virtually unwatchable. Now, however, we can rejoice in this early version of House of Wax starring Lionel Atwill as the mad genius who pours hot wax on restrained victims he then poses as classical figures in his museum. Wray is his next victim because of her resemblance to Marie Antoinette. Her roommate is reporter Glenda Farrell, who was then dating Robert Riskin who would become Wray’s husband in 1940. Wray filmed this at the same time as King Kong.

One of the most iconic films of all time, it took Wray years to appreciate the fame she enjoyed because of it, thinking she should have gotten more credit for other performances. The giant gorilla has been the focal point of a dozen films so far, including two remakes, one in 1976, the other in 2005. Wray plays the actress that the monster becomes obsessed with. It ends with Kong kidnapping Wray and climbing to the top of the Empire State Building with her in his large paw, only to be shot down by soldiers in helicopters. Two days after Wray died in 2004 at 96, the Empire State Building dimmed its lights in her honor.

THE AFFAIRS OF CELLINI (1934), directed by Gregory La Cava

Wray loved her participation in this one. Playing against type, the highly intelligent actress played a bimbo, an artist’s model that even the artist (Fredric March as Cellini) found beautiful but dull. Frank Morgan, reprising his 1925 Broadway role as the Duke of Florence, received an Oscar nomination for Best Actor two years before supporting performances were given their own category. Constance Bennett plays the Duchess who cheats on her husband with the artist. Nominated for four Oscars overall, the others were for the film’s Art Direction, Cinematography and Sound Recording.

TAMMY AND THE BACHELOR (1957), directed by Joseph Pevney

Wray in middle age played it mostly prim and proper as she did here as Leslie Nielsen’s mother in this box-office hit starring Debbie Reynolds as the barefoot houseboat girl who, along with her moonshine making grandfather (Walter Brennan) rescues downed pilot Nielsen and brings him home to his wealthy family. Sidney Blackmer is his father, Mildred Natwick his aunt, Louise Beavers the family maid and Mala Powers his fiancé. Reynolds’ huge hit recording of “Tammy” sparked the film’s popularity which led to the sequels, Tammy Tell Me True and Tammy and the Doctor starring Sandra Dee.