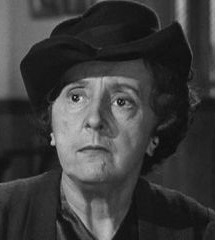 Born October 16, 1881 in London, England to a Canadian doctor and his American wife, Margaret Lovett De Wolfe, known professionally as Margaret Wycherly, had a long and distinguished career on the Broadway stage, but is probably best remembered for two iconic film roles as the very different mothers of screen legends Gary Cooper and James Cagney.

Wycherly married Brooklyn born writer Bayard Veiller in 1901 when she was just 19 years old. Her son, Anthony Veiller, was born in 1903. The younger Veiller would become an even more successful writer than his father and earn two Oscar nominations to his mother’s one.

Wycherly made her Broadway debut as a producer of William Butler Yeats revivals in 1905. She quickly emerged as a major star headlining such hits as 1907’s The Primrose Path, 1908’s Candida, 1910’s The Blue Bird and 1912’s The Fight, which she made into a film in 1915. It would be her only film until 1929’s The Thirteenth Chair, the Broadway version of which she starred in in 1916. Both plays were written by Bayard Veiller whom she would divorce in 1922.

Between her first and second films, Wycherly appeared regularly on Broadway, starring in such plays as 1920’s Jane Clegg, 1922’s Six Characters in Search of an Author, 1923’s The Adding Machine, 1925’s The Devil to Pay, and 1928’s Strange Interlude. She returned to Broadway after filming The Thirteenth Chair to star in 1932’s Another Language and 1933’s Tobacco Road before making another film, 1934’s Midnight.

Although she would continue to work periodically on stage throughout the 1940s, most memorably as Laurette Taylor’s replacement in Tennessee Williams’ The Glass Menagerie in 1946. Wycherly’s career as a character actress in film began in earnest with 1940’s Victory starring Fredric March and Betty Field. She followed that with her Oscar-nominated portrayal of Gary Cooper’s mother in 1941’s Sergeant York, one of two roles for which she is most fondly remembered. Then came Crossroads and Random Harvest in 1942; Keeper of the Flame, The Moon Is Down and Hangmen Also Die! in 1943; The Yearling in 1946; Something in the Wind and Forever Amber in 1947; and The Loves of Carmen in 1948, among others.

Wycherly played her most famous screen role as James Cagney’s mother in 1949’s White Heat. She made just three more films after that, 1951’s The Man with a Cloak and 1953’s That Man from Tangier and The President’s Lady in 1953, before retiring.

Margaret Wycherly died of a stroke on June 6, 1956 in New York City at the age of 74. She is buried in West Sussex England, as is her son Anthony Veiller, who was born in New York and died of cancer in Hollywood in 1965, just four days after his 62nd birthday.

Wycherly created the role of Madame Rosalie La Grange, the medium who presides at the séance that is the scene of a murder in this classic whodunit, in the 1916 Broadway play written by her husband, Bayard Veiller. The actress, who usually played dour characters, was at her comedic best as the medium turned detective working with police inspector Bela Lugosi in trying to solve two murders. Suspects include Conrad Nagel, Leila Hyams, Helene Millard, Holmes Herbert, and Mary Forbes. Dame May Whitty would play Wycherly’s role in the 1937 remake with a cast that included Madge Evans, Lewis Stone, Elissa Landi, and Thomas Beck.

Wycherly received her only Oscar nomination for her portrayal of Gary Cooper’s mother in this legendary film about the pacifist Sunday-school teacher who became the most decorated soldier of World War I. Although released prior to the Japanese attack on Pearl Harbor, the film was still in theatres when the incident that triggered America’s entry into World War II occurred, becoming a rallying cry for young men to sign up for participation in the war. Wycherly’s character has a lot of dialogue early in the film but becomes stoic to the point of having virtually no dialogue as the film progresses, letting her bewildered stares convey her feelings.

KEEPER OF THE FLAME (1943), directed by George Cukor

The second teaming of Katharine Hepburn and Spencer Tracy was a far cry from the comedy of Woman of the Year. Its mix of political chicanery and hidden secrets with just a touch of romance, makes it the darkest of the duo’s nine films together. Tracy plays a highly respected reporter who comes to interview Hepburn as the recent widow of a supposedly great man. Stage actress Pauline Lord was brought in to play Hepburn’s batty mother-in-law, but her scenes didn’t work out well and she was replaced by Wycherly whose role was like Hepburn and Tracy’s, completely different from any of her previous work.

“Made it Ma! Top of the world!” is one of the most famous lines in movie history. It is uttered by James Cagney in one of his greatest roles as criminal Cody Jarett as he goes out in a blaze of glory at the end of the film. Wycherly was Ma in what would become her best remembered role, one that even outclassed her fondly remembered Oscar nominated performance in Sergeant York. The close relationship between the gangster and his domineering mother was based on the real-life Ma Barker and her relationship with her sons. There are good supporting turns by Virginia Mayo and Edmond O’Brien as well.

Wycherly, in her last film, had the small but effective role of Mrs. Robards, Susan Hayward’s mother-in-law in this biography of Rachel Donelson whose later marriage to Andrew Jackson (Charlton Heston) was attacked by first husband Robards as bigamy even though he had been granted a petition for divorce. It was the great scandal of the day, casting a shadow over Jackson’s presidential election. His beloved wife died after he was elected, but before his inauguration. Hayward and Heston were following in the shoes of Beulah Bondi and Lionel Barrymore who played the same roles in 1936’s The Gorgeous Hussey.