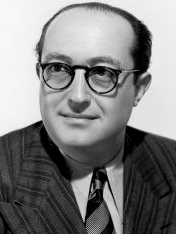 Born Hermann Kosterlitz on May 1, 1905 in Berlin, Germany, the future Henry Koster was the grandson on his mother’s side of famed operatic tenor Julius Salomon who died of tuberculosis in the 1880s. His father, who was a salesman of women’s underwear, abandoned his family when the future director was 5. His mother got a job playing piano in her brother’s movie theatre in 1910, taking young Koster with her where he developed his fascination with film.

Koster achieved success as a short story writer at 17, which resulted in a Berlin movie company hiring him as a scenarist where he eventually became assistant to director Curtis Bernhardt. He became a director himself in 1931, moving to Budapest, Hungary when Hitler came to power. There he met and married actress Kato Kiraly. There he also met Joe Pasternak, Universal’s representative in Europe, for whom he made four films. In 1936, Universal brought Pasternak, Koster and his wife, and several other refugees to Hollywood where he was given a contract.

Koster’s first Hollywood film was 1936’s Three Smart Girls starring 14-year-old Deanna Durbin, the film that saved Universal from bankruptcy, His second was 1937’s 100 Men and a Girl, also starring Durbin, and also a huge hit. Both films were nominated for Best Picture Oscars. In 1940, he discovered Abbott and Costello doing a nightclub act in New York and brought them to Universal where they became overnight sensations. Divorced from Kiraly in 1941with whom he had one child, he married actress Polly Moran in 1942 with whom he would have two more children.

He went from Universal to MGM with Pasternak after directing Durbin in 1941’s It Started with Eve. On loan to Samuel Goldwyn for 1947’s The Bishop’s Wife, his efforts resulted in his first and only Oscar nomination. In 1948, he moved to Twentieth Century Fox where he had his greatest successes.

Back at Fox, Koster directed Richard Burton to Oscar nominations for 1952’s My Cousin Rachel and 1953’s The Robe. He subsequently directed Marlon Brando and Jean Simmons in 1954’s Désirée, Richard Todd and Jean Peters in 1955’s A Man Called Peter, Bette Davis, Todd and Joan Collins in 1955’s The Virgin Queen, Jenifer Jones and Robert Stack in 1955’s Good Morning, Miss Dove, and Robert Taylor and Todd in 1956’s D-Day the Sixth of June.

During the next ten years, Koster alternated between MGM, Universal and Fox, directing such high caliber films as 1960’s The Story of Ruth, 1961’s Flower Drum Song, 1962’s Mr. Hobbs Takes a Vacation, 1963’s Take Her, She’s Mine, 1965’s Dear Brigitte and 1966’s The Singing Nun, after which he moved to Leisure Village in Camarillo, CA where he lived in quiet contentment with Moran until he died on September 21, 1988 at 83.

The Christmas perennial began life as a novel by Robert Nathan (Portrait of Jennie). David Niven was the bishop, Loreta Young his wife and Cary Grant the angel who takes human form to aid them in answer to their prayers. All three are perfectly delightful as are supporting players Monty Woolley as an old friend of the bishop and his wife, Gladys Cooper as a wealthy parishioner, James Gleason as a loquacious taxi driver and Elsa Lanchester as a maid. It was nominated for five Oscars including Best Picture and Director, providing Koster with his only nomination. It won for Best Sound Recording.

James Stewart first played Elwood P. Dowd, the man whose best friend is an invisible giant rabbit named “Harvey” on Broadway as a replacement for original star Frank Fay in Mary Chase’s Pulitzer prize-winning play. It brought him the fourth of his five Oscar nominations. Josephine Hull won an Oscar playing his exasperated sister. Stewart and Helen Hayes starred in the 1970 Broadway revival and the 1972 TV special made from that production. Jim Parsons and Jessica Hecht starred in a 2012 Broadway revival of the beloved farce. Koster’s direction is, as always, spot on.

The first film to be released in Cinemascope, although not the first made. That was How to Marry a Millionaire which was released two months later. Nominated for five Oscars including Best Picture, Richard Burton received his second nomination for playing Marcellus Gallio, the Roman Tribune ordered to crucify Jesus of Nazareth. Burton is good but he is overshadowed by Jean Simmons as the lovely Diana and Jay Robinson as the vicious Caligula. Victor Mature as Demetrius, Michael Rennie as Peter, Dean Jagger as Justus, and Richard Boone as Pontius Pilate co-star. It won Oscars for Art Direction and Costume Design.

Nominated for five Oscars, Koster’s film of Rodgers & Hammerstein’s musical retains most of the show’s terrific songs. Only “Like a God” is missing. “A Hundred Million Miracles”, “I Enjoy Being a Girl”, “Love, Look Away”, “Chop Suey” and the rest are there in all their glory. Third billed Miysohi Umeki, already an Oscar winner for Sayonara, has the main role but she is billed below Nancy Kwan (fresh from The World of Suzie Wong) and James Shigeta (Bridge to the Sun),. Jack Soo, Benson Fong and Juanita Hall co-star as other denizens of San Francisco’s then contemporary Chinatown.

James Stewart received a Golden Globe nomination for one of his best comedic performances and both he and Maureen O’Hara were nominated for Laurel Awards. The two play so extremely well together as young grandparents you would think they had been together for years when it was, instead, their first film together. They play a couple whose planned summer getaway is compromised when their extended family joins them. Fabian, Lauri Peters, Lili Gentle, John Saxon, John McGiver, Marie Wilson, Reginald Gardiner, Michael Burns and Minerva Urecal co-star in one of Koster’s biggest hits.