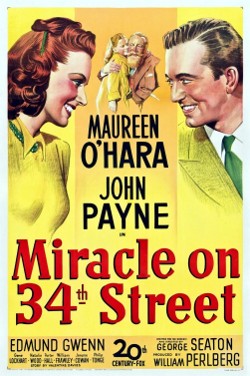 The official start of the holiday season in the U.S. begins on Thanksgiving Day, which is just two days away. Holiday movies, almost all of them dealing with the lead-up to Christmas Day, have already been appearing with regularity on the Hallmark Channel and the various streaming services. You can spend your holiday viewing time watching them if you want to see the latest variation on successful guy or gal leaving the big city to return home for the holidays where he or she will either find or reunite with the love of their life and throw away their successful big city career for a more down-home happily-ever-after.

Those made-for-TV films are almost all filmed in Vancouver, Canada, filling in for whatever small town in the U.S. in which they’re supposed to be taking place. They’re all filmed in the summertime with fake snow. Their casts are made up mostly of actors you’ve never heard of or may never see again. Why people keep watching this stuff when there are so many other things that they could spend their time watching is beyond me.

For me, holiday viewing begins on or as near to Thanksgiving Day as I can muster with the original 1947 version of Miracle on 34th Street. There have been four official remakes of this perennial as well as numerous imitations, but none hold a candle to the original starring Edmund Gwenn as Santa Claus aka Kris Kringle, Maureen O’Hara as the Macy’s executive in charge of the annual parade, John Payne as the lawyer who defends the existence of Santa Claus, and Natalie Wood as the skeptical young girl who comes to believe in him.

For the record, the remakes include a 1955 TV version with Ed Wynn, Mary Healy, and Peter Lind Hayes in the Gwenn-O’Hara-Payne roles; a 1959 TV version with Thomas Mitchell, Teresa Wright, and Madonald Carey; a 1973 version with Sebastian Cabot, Jane Alexander, and David Hartman; and a 1994 theatrical remake with Richard Attenborough, Elizabeth Perkins, and Dylan McDermott. I’ve never seen the 1955 version, but I have the others, of which the 1959 version is the only one that is even tolerable thanks to the always welcome participation of Oscar winners Mitchell and Wright.

Beyond the original Miracle on 34th Street, however, there are many classic films featuring the Thanksgiving holiday that are far superior to the made-for-TV dreck.

Here are ten of them:

Arthur Penn’s 1969 comedy-drama, Alice’s Restaurant, is based on Arlo Guthrie’s famous autobiographical song about his run-ins with the “establishment,” the first during Thanksgiving in Cambridge, Massachusetts, and the second a draft board examination in NYC. Gutherie and Pete Seeger play themselves, with Pat Quinn and James Broderick as the couple at whose home Thanksgiving takes place.

Lawrence Kasdan’s 1983 comedy-drama, The Big Chill, is about a reunion of friends following a funeral. It stars Glenn Close, Kevin Kline, William Hurt, Tom Berenger, Jeff Goldblum, Mary Kay Place, JoBeth Williams, Meg Tilly, and an unbilled Kevin Costner as the corpse. Though not set at Thanksgiving, it has a Thanksgiving feel to and does feature a flashback sequence that does take place during the holiday.

Woody Allen’s 1986 comedy-drama, Hannah and Her Sisters, begins on one Thanksgiving and ends on another two years later. The strong cast includes Mia Farrow, Barbara Hershey, and Dianne Wiest in an Oscar-winning performance, as the sisters. Woody Allen, Max von Sydow, and Michael Caine in another Oscar-winning performance, play the principal men in their lives. Maureen O’Sullivan, Mia’s real-life mother, and Lloyd Nolan play their parents, with Carrie Fisher as Wiest’s catering business partner.

Robert Benton’s 1994 comedy-drama, Nobody’s Fool, gave us Paul Newman in his last great role, that of an aging smalltown ne’er-do-well who reconnects with one of his grandsons during Thanksgiving. Newman, who won his only New York Film Critics award for acting, and his last Best Actor Oscar nomination for this, has never been better. Jessica Tandy, in her last role, is an added treat as his caring landlady.

Jodie Foster’s 1995 comedy, Home for the Holidays, gives us one of the screen’s most endearing dysfunctional families with Holly Hunter as the protagonist, a divorcée who goes home for Thanksgiving where her bickering parents are played by Anne Bancroft and Charles Durning. Robert Downey Jr. is a standout as her gay brother, with Dylan McDermott, Geraldine Chaplin, Claire Danes, Steve Guttenberg, and Austin Pendleton weaving in and out of the story.

Emilio Estevez’s 1996 drama, The War at Home, is about a Vietnam War veteran’s difficult return home, climaxing on Thanksgiving Day. Estevez plays the traumatized veteran with his real-life father, Martin Sheen, as his father and Kathy Bates as his mother. Kimberly Williams plays his sister, the fourth member of this sad family. Bates, as usual, is the standout here as the always cheerful mother.

Ang Lee’s 1997 drama, The Ice Storm, takes place during Thanksgiving week in affluent New Canaan, Connecticut concentrating on two families, one consisting of Kevin Kline, Joan Allen, Tobey Maguire, and Cristina Ricci, the other consisting of Sigourney Weaver, Jamey Sheridan, Elijah Wood, and Kevin Hann-Byrd, with Katie Holmes, David Krumholtz, Kate Burton, and Allison Janney also in the mix. Though a great dramatic film, this is not exactly one for the whole family. The film’s key scene involves key and wife swapping.

Peter Hedges’ 2003 comedy-drama, Pieces of April, gives us Katie Holmes as a wayward daughter who invites her dying mother and the rest of her estranged family to spend Thanksgiving with her in her crummy NYC apartment. Derek Luke is her Black boyfriend, Oliver Platt is her perplexed father, and Patricia Clarkson, in an Oscar-nominated performance, is her not very nice mother.

John Lee Hancock’s 2009 drama, The Blind Side, is the film for which Sandra Bullock was finally taken as a serious actress, earning an Oscar for her efforts as a privileged white woman who takes in a homeless Black teen that she mentors into becoming an NFL star. Although not really a Thanksgiving film, it features a memorable scene set at the holiday, and includes plenty of football scenes for those who can’t get enough of the sport at this time of year.