This weekend, Lin-Manuel Miranda’s breakout Broadway hit makes its way to the big screen after a year’s delay due to the pandemic. In celebration of the first major live-action movie musical since La La Land, I wanted to take a look at my all-time favorite musicals, both originals and stage-to-screen adaptations.

Before digging into my favorites (remember, this is a list of favorites, not “best,” though these films would likely show up on a list of best, let’s take a look at some musicals I didn’t include.

Let’s start with the Disney renaissance of the 1990s. After The Little Mermaid made it big, a slew of original musicals found their way onto the big screen. While that film’s immediate successor, Beauty and the Beast, is the greatest animated musical of all time, there were some other solid efforts thereafter, including The Hunchback of Notre Dame and Mulan. The 2000s Disney renaissance featured The Princess and the Frog and one of the few subsequent animated movie musicals (not Disney, but Disney hasn’t made many either), Sing, also made my shortlist.

Adapting from stage to screen is difficult, but there were a number of these films that I enjoyed and might have considered had I given myself more room to accommodate. Those films include The Sound of Music and Oliver! from the 1960s, The Wiz and The Rocky Horror Picture Show from the 1970s, Little Shop of Horrors from the 1980s, and Hairspray from the 2000s.

And finally, we had original movie musicals. This type has been few and far between, but some of the best have included Willy Wonka and the Chocolate Factory and, most recently, The Greatest Showman.

One musical that doesn’t quite fit into these categories, but deserves recognition, is the musical art film Pink Floyd – The Wall, a dizzying visualization of Pink Floyd’s legendary story album with memorable music and some of the greatest animated sequences ever produced on film. 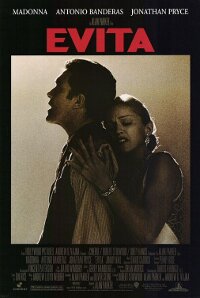 My absolute favorite musical is one that has been maligned in some circles, but which takes the art of the epic movie musical to new heights. Madonna stars as Argentine First Lady Eva Peron in Alan Parker’s magnificent musical Evita. The film follows the rise to fame and power of one of the most influential women in world history, a woman whose vanity was legendary, but whose desire to help the common people of her nation was stratospheric, even if often misdirected.

Madonna is phenomenal as Eva while Antonio Banderas plays the charismatic foil Ché Guevara, a figure that never delved into Argentine politics, but was meant to represent the true everyman revolutionary. Jonathan Price provided able support as Juan Peron, but the film anchors itself around Madonna’s performance and the soaring musical score by Andrew Lloyd Webber with lyrics by Tim Rice. The film is a non-stop musical extravaganza, which isn’t everyone’s cup of tea. Regardless, it’s a tremendous accomplishment that still tingles my spine every time I see or hear it. 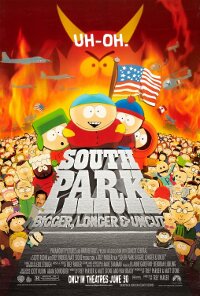 No one would expect the creators of one of the most controversial animated series in the last three decades to mount one of the most impressive musical extravaganzas we’ve seen in the same period, but South Park managed to do it. Bigger, Longer and Uncut successfully takes the traditional structure of a musical and applies it to crass, contentious, and hilarious songs. The film manages to tackle thorny issues such as war, censorship, and overbearing parenthood, issues that were often tackled on the show itself, and bring us to the other side with a perhaps overly rosy view that two opposing sides can come together once they realize the error of their ways.

The astute film’s narrative follows Cartman as he is implanted with a chip that shocks him every time he tries to say bad words or inappropriate phrases, something not terribly dissimilar to the torture methods used against Alex deLarge in A Clockwork Orange. As his friends attempt to find a way to subvert the government for its ill-advised and dangerous decision to punish Cartman for his foul mouth, Satan rises from hell to punish the world for its murder of the ever-dying Kenny, which leads to a cataclysmic war with Cartman at the center. While being a fan of the show will certainly help you appreciate the film itself. Those who aren’t fans can get involved in the story with minimal series knowledge and enjoy what ends up being one of the best original musicals in the last 50 years. 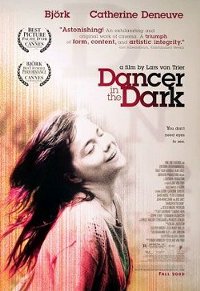 On the opposite side of the coin from South Park, Icelandic sensation Bjork brought us the most depressing musical in history, a fascinating look at a mother’s attempt to protect her son from her inherited debilitating ocular degeneration by getting him the surgery he desperately needs. Having saved up the money for the operation, she discovers her hoard has been pilfered and confronts the thief in his home where he convinces her to kill him to get the money back, but ultimately botches the job due to her blindness.

The film uses Bjork’s fantasy that she’s living in a musical as a framing device and the singer crafts some terrific songs that either literally or metaphorically fit into each of their settings, including the rev of machinery, the movement of a train on its tracks, and the sounds of her footfalls on the steps of the prison as she’s marched off to her execution. Each song is unique, but fits beautifully into a film that is as haunting as it is inventive. 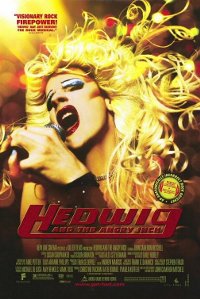 Based on his 1998 stage musical, queer pioneer John Cameron Mitchell brings the story of Hedwig to the screen. It’s a film about an East German teenager who suffers a botched gender reassignment surgery and is left with the useless, titular inch of flesh between her legs as she relocates to the United States with her husband. After he leaves her, she attempts to return to her rock n roll roots, but struggles to find her place in the world after another paramour steals her songs and becomes a successful rock musician.

This film features a rocking soundtrack of songs adapted from the stage version that explores identity, familial history, and self-recriminations against the backdrop of a changing world. Mitchell is terrific in the lead role and audiences will be in for a crass, but mesmerizing experience that ultimately revels in its rebuke of societal norms and its genial attempt to speak out for the misfits and losers of the world. It’s a potent story that demands to be seen at least once. 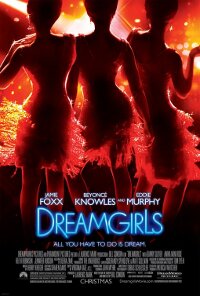 Dreamgirls was a hit Broadway musical by Henry Krieger and Tom Eyen released in 1981, winning 6 Tony awards, including three for its five nominated actors, but losing the Tony for Best Musical to Nine, which was turned into a far inferior film three years after this one. The highlight of the musical is Jennifer Holliday’s passionate showstopper “And I’m Telling You I’m Not Going” and it’s given fresh light and equal passion by Oscar winner Jennifer Hudson in the film version.

The fictional story about a popular Black girl group in the 1960s bears a lot of similarities to the rise of Diana Ross and The Supremes with a few liberties taken. Director Bill Condon brought the stage musical to vivid life in what amounts to being one of the best adaptations in modern memory, framing the events of the film with the societal upheaval of the Civil Rights Movement adds additional contextual relevance to a musical that was already a stirring commentary on the vainglorious and image-conscious music industry. The musical simultaneously celebrates the legendary Motown sound, making it a strange concoction of revelry and rebuke.