It’s hard to believe the career Brad Pitt has had. Trading on his good lucks, his first breakthrough role came in Ridley Scott’s Thelma & Louise. He has a brief part in the film, but he made such an impression that his career took off afterwards. From there, his ascendant star led him through countless potential blockbusters and while he eventually settled into more dramatic roles, each new release was meant to be a potential box office sensation. This weekend, one of his more broadly appealing of late releases. Bullet Train isn’t going to be confused for Oscar bait, but Pitt gives his all to this Asian martial-arts-fueled, John Wick-style action film. Whether it’s a box office hit or not remains to be seen, but every indication points to yes. This week, we give Pitt his own article with five films that are essential to his filmography, all of which were successes with the first the only one that he wasn’t the reason for the film’s success. 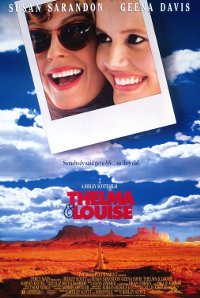 Director Ridley Scott’s career had been largely built on his genre filmmaking from neo-noirs like Black Rain to Sci-Fi like Alien and combinations of the two like Blade Runner. Yet, it was almost 15 years after his Cannes Film Festival debut in 1977 that he’d last tackled a straight up drama. In Thelma & Louise, he put Oscar winner Geena Davis and nominee Susan Sarandon together as best friends who go on a road trip only to walk into a situation that leaves the pair running for their lives.

A compelling exploration of women and how fearful they are that the men in power won’t believe them when they step forward about rape and abuse, the film is made by Davis’ and Sarandon’s performances as the titular duo. Scott’s direction allows the women to command the screen while Callie Khouri’s insightful screenplay takes center stage. Pitt plays a drifting hitchhiker who robs the pair. His isn’t a defining performance, but it was a notable breakthrough for the future Oscar winner. 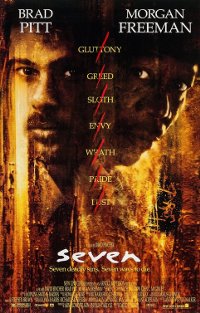 In his career, Pitt has worked with a number of notable filmmakers, most of them already established. That was not the case when he agreed to star in David Fincher’s second feature film, Seven. Pitt had already made a name for himself on the big screen when he agreed to star opposite Morgan Freeman in this big screen treatment of a frequent small screen detective trope, tracking down a serial killer. Pitt partners with retiring Freeman to try to solve a series of gruesome murders carried out by an elusive killer using the seven deadly sins as his inspiration.

This taut crime thriller was a box office success and helped further launch Fincher’s career as a prominent filmmaker. Pitt and Freeman are an extremely watchable pair as you follow along with them and the narrative, which features numerous twists and turns that will leave the audience guessing until the end. The film co-stars Gwyneth Paltrow as Pitt’s wife and which would help boost her public profile. It’s not the kind of film that demands tremendous acting prowess, but as a narrative, the solid performances anchor the audience’s expectations of how successful they want the film’s stars to be in their time-ticking pursuit of a killer. 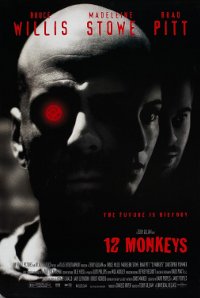 Working with yet another fascinating filmmaker and released the same year as the prior entry, 12 Monkeys puts Pitt into a supporting role opposite Bruce Willis. The filmmaker here is Terry Gilliam, the visionary mind behind Brazil and The Fisher King. Another foray into time-bending narratives, Gilliam’s film centers on Willis as a lowly prisoner plucked from his misery to travel back in time and carry out an assassination attempt against the prominent scientist behind the deadly virus that nearly wiped out humanity.

Willis is at his dependable best in a role that seems him trying to convince skeptical individuals that he’s not only from the future, but that his goal is the prevent catastrophe while slowly unwinding a plot that suggests he’s being used for other nefarious aims. Pitt’s role is a relatively minor, but pivotal one as a psychiatric patient who helps set Willis on the path towards unraveling the film’s mystery. Pitt’s bonkers performance landed him the film’s only Oscar nomination (his first) for Best Supporting Actor. Madeleine Stowe and Christopher Plummer provide able support. 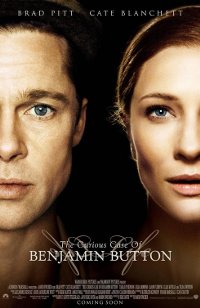 Working once again with David Fincher, Pitt is the titular figure Benjamin Button, a man who is born old and grows younger as the film progresses. Cate Blanchett plays the adult version of the woman he ultimately falls in love with. Fincher had continued developing his status as a prominent genre filmmaker at the time he signed on to film this long-gestating project. Originally optioned from F. Scott Fitzgerald’s novel of the same name in the mid-1980s, the film went through a long run of different filmmakers who signed on, but later left the project until Fincher finally realized it.

Although the film is a fantasy, that’s about where the genre description ends. Fincher brings intense humanity to the search for meaning in life when we have the possibility of living life in reverse. It’s a fantastic period story that asks interesting questions about the disappointment of not being able to enjoy life while you’re young and having to hold onto the joys for the significantly less time one has left when they finally get into a position where they can do so. Pitt’s terrific performance was nominated for Best Actor while Blanchett’s equally wonderful performance was ignored. Taraji P. Henson earned a deserved nomination for Best Supporting Actress for her maternal performance. The two actors joined Fincher as part of the film’s stellar 13 nomination haul. Unfortunately, the film only managed to secure three wins for Art Direction, Makeup, and Visual Effects. Even though it was one of the best films of its year. 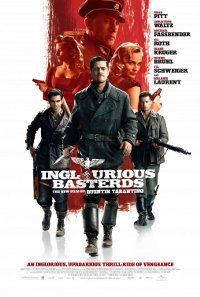 Speaking of gifted filmmakers, Quentin Tarantino has successfully built a reputation as one of the foremost of this generation. Directing few films over the course of his career, Inglourious Basterds was his sixth of nine features to date across a 30-year career. Basterds is Tarantino’s first period feature setting his action during World War II. Pitt leads a team of Jewish American soldiers carrying out a covert operation for the British into Germany in an effort to take out Hitler while taking out as many Nazis in the process as possible. The film contemplates an alternate history that engages in a bit of historical revenge revisionism, which would be replicated three years later in Django Unchained.

Apart from Tarantino’s first two films, his pictures tend to give power and agency to typically marginalized figures. Inspired by B movies of the 1970s, his films tackle familiar genres as he embellishes them with hyper-stylized violent sequences, adding a visceral hyper-realism to films that had been typically more subdued. While the 1970s is an obvious influence, Inglourious Basterds takes its inspiration from the numerous 1940s war films that permeated cinema in that era. Pictures like The Dirty Dozen and Guns of Navarone are clearly reflected in the work. Filled with strong performances, it was Tarantino’s first Best Directing citation since 1994’s Pulp Fiction and represented his biggest Oscar success yet with eight nominations, including one for Best Picture.