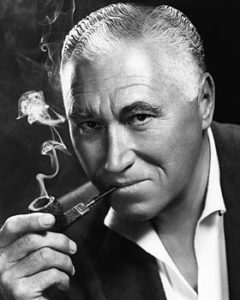 Born August 10, 1896, in Memphis, Tennessee, Walter Lang entered the film business as a young man when he got a job in a production company, working his way up to assistant director and then director. His first film as director was 1925’s The Red Kimono. He worked steadily even though he temporarily quit the business to study art in Paris.

Lang, who was a distant nephew of director Fritz Lang, met future wife Madalynne Field in 1936 when he directed Love Before Breakfast starring Carole Lombard. Field and Lombard met while performing for Sennett’s Bathing Beauties in the late 1920s and had remained friends with Field acting as Lombard’s secretary. Lang and Field were married in 1937. Lombard and Clark Gable were godparents of Lang’s son, Richard, who became a Hollywood director himself.

Lang then began a long tenure at Twentieth Century-Fox. Among his early films for Fox were Second Honeymoon with Tyrone Power and Loretta Young, The Little Princess with Shirley Temple, The Great Profile with John Barrymore, Tin Pan Alley with Alice Faye and Betty Grable, Moon Over Miami with Grable and Don Ameche, Weekend in Havana with Faye and Carmen Miranda, and Greenwich Village with Miranda and Ameche.

In 1945, Lang became one of Fox’s top directors with his direction of Rodgers & Hammerstein’s State Fair with Jeanne Crain, Dana Andrews, Dick Haymes, and Vivian Blaine. He followed it with Claudia and David with Dorothy McGuire and Robert Young, Sentimental Journey with Maureen O’Hara and John Payne, Mother Wore Tights with Grable and Dan Dailey, Sitting Pretty with O’Hara, Young, and Clifton Webb, and When My Baby Smiles at Me with Grable and Dailey. Webb and Dailey were both nominated for Oscars for Best Actor of 1948 for the latter two films.

Lang’s pace slowed somewhat in the 1950s, but his output still provided Fox with hefty profits for such films as Cheaper by the Dozen with Webb and Myrna Loy, With a Song in My Heart with Susan Hayward and Thelma Ritter in Oscar nominated performances, Call Me Madam with Ethel Merman repeating her Broadway triumph opposite Donald O’Connor, There’s No Business Like Show Business with Merman, Dailey, O’Connor, and Marilyn Monroe, and The King and I for which Lang received his only Oscar nomination for directing Deborah Kerr to an Oscar nomination and Yul Brynner to a win reprising his Broadway role.

Post-Oscar nod, Lang directed Spencer Tracy and Katharine Hepburn in Desk Set, Clark Gable, Carroll Baker, and Lilli Palmer in But Not for Me, Frank Sinatra and Shirley MacLaine in Can-Can, Susan Hayward and James Mason in The Marriage-Go-Round and the Three Stooges in Snow White and the Three Stooges. He was asked to direct The Sound of Music but decided to retire instead.

Philip Strong’s novel was first filmed in 1933 with Will Rogers as the Iowa farmer, Louise Dresser as his wife, Janet Gaynor and Norman Foster as their kids, and Lew Ayres and Salley Eilers as the kids’ romantic partners. Lang’s version had the benefit of Rodgers & Hammerstein’s only score written for the screen with Charles Winninger, Fay Bainter, Jeanne Crain, Dick Haymes, Dana Andrews, and Vivian Blaine. The 1962 remake changed the location to Texas and added a song or two for Tom Ewell, Alice Faye, Pamela Tiffin, Pat Boone, Bobby Darin and Ann-Margret. Oscar for Best Song, “It Might as Well Be Spring”.

Lang’s long history with original film musicals reached its zenith with this one. Susan Hayward excels as Jane Froman in one of the best musical biographies ever made, flawlessly lip-syncing to the legendary singer’s performance of the great American songbook. Alfred Newman’s scoring won him an Oscar over Singin’ the Rain. The film received an additional four nominations including those for Hayward and Thelma Ritter as the nurse who helps her through the injuries to her legs sustained in a crash of the plane that was transporting her from one location ot another while entertaining the troops during World War II.

Lang’s beloved film was the third adaptation of a Rodgers & Hammerstein Broadway musical following Oklahoma! and Carousel and the first to receive an Oscar nomination for Best Picture. Nominated for a total of nine Oscars, it won five including one for Yul Brynner as Best Actor reprising his Broadway triumph, a role he would continue to play off and on until his death in 1985. It also won for Art Direction-Set Design, Costume Design, Sound and Scoring. Its other nominations, in addition to Best Picture, were for Leon Shamroy’s Cinematography, Deborah Kerr as Best Actress and Lang as Best Director.

This highly satisfying comedy about the introduction of technology 1950s style in the workplace was the eighth of the nine films Spencer Tracy and Katharine Hepburn made together, their first for a studio other than MGM and their first in color. Both stars at the top of their form here with Tracy as the interloper with the new machinery and Hepburn as the skeptical research supervisor he slowly wins over. Gig Young co-stars in one of his signature “other man” roles, with Joan Blondell, Sue Randall and Dina Merrill in fine form as Hepburn’s assistants, and Neva Patterson equally good as Tracy’s installer.

This third film version of Samson Raphaelson’s 1934 play, Accent on Youth, marked the only time that Fox allowed Lang to direct a film for another studio. He did so at the request of the film’s star, Clark Gable, Lang’s longtime friend and godfather to his son, Richard. Gable plays an over-the-hill Broadway producer whose young secretary (Carroll Baker) inexplicably has a crush on him. Enter former girlfriend Lilli Palmer who is more his speed. The film received Golden Globe nominations for Best Picture-Comedy, Actor and Actress (Palmer, not Baker) losing to Some Like It Hot in all three categories.